Which are the large-scale processes that influence thunderstorm activity in Europe?

Research on extreme weather events and climate change has made significant steps forward in recent years. However, a better understanding of the influence of large-scale processes on thunderstorm activity is still required.

In Europe, severe convective storms and their associated ub-perils such as hail, convective wind gusts or tornadoes often cause considerable damage to buildings, infrastructure, agriculture, and ecosystem. Despite the high relevance of questions on the past and future development of such events, the role of natural climate variability and the influence of large-scale dynamic processes and mechanisms on such phenomena is still little understood. In order to close this gap in knowledge, the working group "Atmospheric Risks" at IMK-TRO has been working on this issue in several projects for several years.

Recently, a doctoral thesis showed that the annual variability of thunderstorms is related to the variability of the Atlantic sea surface temperature or different teleconnection patterns of the Northern Hemisphere (e.g., North Atlantic/East Atlantic Oscillation; Piper, 2017; Piper and Kunz, 2017; Piper et al., 2019). For example, the sea surface temperature over the Bay of Biscay influences the annual European thunderstorm frequency, with the strongest positive effect in France.

Several activities of the working group also investigated if certain weather regimes, such as blocking situations over Europe, have an influence on thunderstorm activity. Atmospheric blocking with a lifetime of several days to weeks is a quasi-stationary, persistent flow pattern in the mid-troposphere. This influences the low pressure activity in a certain region. Thus, an almost stationary, stable high in the troposphere at 5 to 10 kilometers leads to a blocking of the West wind drift. In the past, it has already been shown that such persistent weather situations are associated with the intensity and frequency of weather extremes such as cold spells, heat waves, or heavy rainfall events in regions upstream or downstream of the blocked area.

A first case study within the research activities of the working group indicated a connection between blocking and thunderstorms. For example, Piper et al. (2016) show that an exceptional sequence of severe thunderstorms, which caused several flash floods in Germany in May and June 2016 (e.g., Braunsbach flash flood), was favored by persistent convection-favouring conditions. This exceptional situation, which lasted for almost two weeks, was first associated with a Scandinavian and later with a European block.

Similar conditions prevailed during a three-week period in May and June 2018, when large parts of Western and Central Europe were hit by an exceptionally high number of thunderstorms, causing precipitation of up to 80 mm in one hour and several flash floods (Mohr et al. 2020). During this period, the large-scale atmospheric circulation, which was characterized by a block over northern Europe, influenced the atmospheric conditions relevant for the development of thunderstorms. The southwestern flow on the western flank of the blocking anticyclone initially induced the advection of warm, moist and unstable air masses. Due to the low pressure gradients associated with the block, these air masses were trapped over Western and Central Europe, remained almost stationary and prevented a significant exchange of air masses. Furthermore, the block increased the cut-off frequency in upstream regions, which was up to 10 times higher than the climatological mean (Fig. 1). Together with filaments with positive potential vorticity (PV), these cut-offs served as trigger mechanisms for the majority of thunderstorms. For the study period we found that more than 50 % of the lightning strikes could be associated with a nearby cut-off low or PV filament.

As part of a collaboration with the University of Bern, we also investigated if this correlation (blocking vs. thunderstorm activity) can also be observed over a long period of time.  Two areas were identified where the occurrence of a block significantly influences thunderstorm activity in Europe (Mohr et al., 2019). While a block over the eastern part of the North Atlantic leads to a northern to northwestern advection of dry and stable air masses to Europe at the eastern flank of the block and thus to convection-inhibiting conditions, a block over the Baltic Sea results in convection-favoring conditions (Fig. 2). Here, the south to southwest advection of warm, moist and unstable air masses – mainly from the Atlantic, but also from the Mediterranean or from eastern regions – on the western flank of the block over the Baltic Sea leads to optimal conditions for thunderstorm development over Western and Central Europe.

The working group is still currently working on this issue. Within the framework of the recently started project "Long-term variability and serial clustering of severe thunderstorms in a changing climate (VarCluST)", a sub-project within the BMBF joint project ClimXtreme, it is to be investigated which further processes on the large-scale scale still have an influence on thunderstorm activity and which changes in thunderstorm frequency and the relevant processes must be expected in the future. Furthermore, it will be investigated how observed clusters of thunderstorm events on scales of several days to weeks (called serial clustering) are specifically determined by large-scale mechanisms.

Fig. 1: Climatological mean of cut-off low frequency (black contours; every 2 %; for May/June 1981 - 2010) and anomaly during the study period (May/June 2018; coloured in % with reference to the mean frequency in May/June; data source: ERA-Interim; ©KIT/Susanna Mohr). 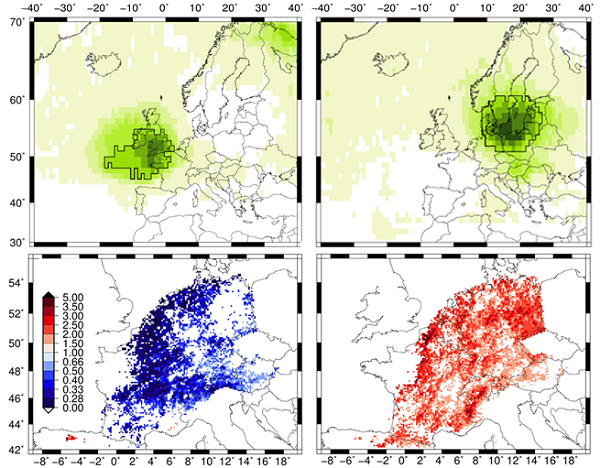 Fig. 2: Two areas (above) – one over the eastern part of the North Atlantic (left) and one over the Baltic Sea (right) – were identified as locations where blocking influences the occurrence of thunderstorms in parts of western and central Europe (above). Below is shown the associated statistical relationship using the odds ratio: blue colours show a decrease in thunderstorm activity by a block (e.g. a value of 0.5 means a 50% decrease in the odds ratio) and red colours an increase (e.g. value = 2 means a doubling of the odds ratio; ©KIT/Susanna Mohr).

last change: 2020-03-23 KIT – The Research University in the Helmholtz Association