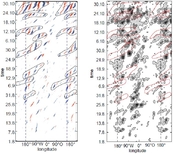 The joint research project for Research Area A was on the methods to identify Rossby wave trains and breaking. The results have been published in Tellus by Glatt et al.

The key role of diabatic processes in modifying the upper‐tropospheric wave guide: a North Atlantic case‐study

The joint research project for Research Area B was on the diabatic processes during the extratropical transition of Hurricane Hanna and the following development of the Mediterranean cyclone Olivia. The results have been published in Q.J.R. Meteorol. Soc. by Grams et al.

The joint research project with participation of several PANDOWAE projects investigates the dynamics of a heavy precipitation event with focus on large-scale forcing, predictability and moisture sources.The paper is accepted for publication in Q.J.R. Meteorol. Soc. by N. Piaget et al.

The study under lead of VARNAER investigated the dynamics and predictability of the 2009 MSSW event. The results have been published in Monthly Weather Review by Schneidereit et al.