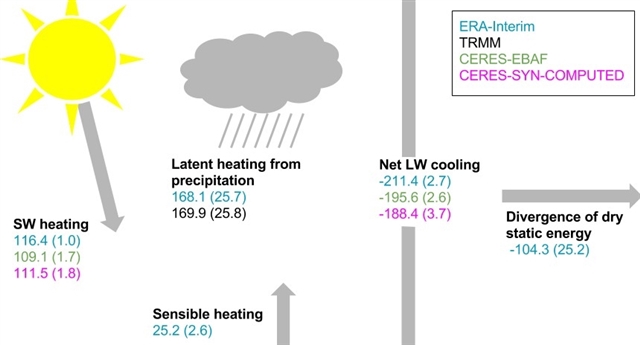 Radiative processes are crucial in determining the forcing and feedbacks operating on a variety of timescales and strongly influence synoptic-scale evolution and climate change. Knowing the properties of the surface and of gases, clouds, precipitation and aerosols in the atmosphere, the radiative energy emitted and reflected by the Earth-atmosphere system can be accurately predicted. Therefore, radiation measurements provide an excellent pathway to evaluate and improve the accuracy of physical processes represented in weather forecast and climate models (as shown in the image below). In particular, models have displayed substantial biases over the West Africa region in both reflective shortwave and outgoing longwave radiation. These radiative biases are mainly due to the deficiency in modelling surface albedo, aerosol distribution and its interactions with cloud and precipitation, which leads to a large uncertainty in radiative effects of cloud and aerosol. 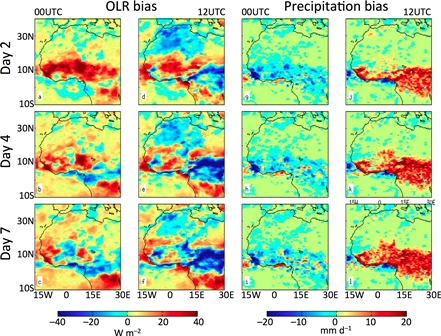 The image above shows the performance of 2-day (upper panel), 4-day (middle) and 7-day (bottom) forecast made by the Met Office global numerical weather prediction model in outgoing longwave radiation (OLR; left two columns) and precipitation (right two columns) at 00 UTC (around midnight) and 12 UTC (around local noon). The performance is evaluated against Geostationary Earth Radiation Budget (GERB) data. The precipitation bias in southern West Africa, underestimation at midnight and overestimates at noon, reveals the outstanding problem that the predicted diurnal cycle of precipitation peaks too early at noon, rather than in the afternoon as we see in observations. (Courtesy of Richard Allan, University of Reading.)

The objective of this work package is to quantify the radiative forcing of clouds and aerosols (direct and indirect) using two complimentary approaches: a regional multi-year multi-satellite analysis, and a detailed radiative closure study including airborne and ground-based measurements from DACCIWA. The specific objectives are to:

The multiple-satellite dataset combined with radiative closure calculations will be used to evaluate predictive skills of models across various temporal and spatial scales, and to deliver a new understanding of the interactions and potential feedbacks between cloud and aerosol radiative effects and atmospheric circulation.

Using multiple satellite observations, the ERA-Interim reanalysis, and four climate models, we have published a paper (Hill et al., 2016) to document the climatology of cloud, precipitation, and radiation over SWA in June–July. Key points are:

Using daily satellite data and reanalysis simulations, onset and cessation of the rainy seasons across Africa are diagnosed in Dunning et al. (2016). Key points are:

As shown in the figure below, the DACCIWA region is mainly fuelled by shortwave radiative heating and latent heating from precipitation, which is balanced by a combination of net radiative cooling and divergence of dry static energy. Interestingly, while shortwave and longwave radiation are among the largest terms in the energy budget, they show little interannual variability and are relatively homogeneous throughout the DACCIWA region. 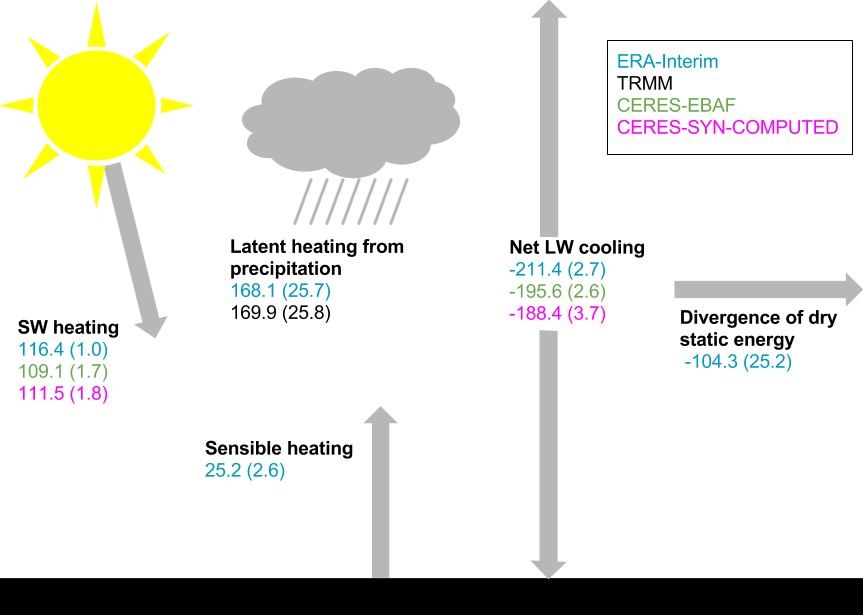 Key terms in the atmospheric energy budget for the DACCIWA region. Numbers shown are June–July means
(standard deviations of interannual means in parentheses) for 2000–2015 from the data source indicated
by that color.

We have collected measurements from cloud radar, lidar and sunphotometer at the Savé site for our synergetic retrieval method, dubbed “ENCORE” (Fielding et al., 2014, 2015). The sun photometer’s measurements alone have been used to retrieve cloud optical depth and effective radius. Although we still need to perform post-campaign calibrations for the sun photometer, the instrument appeared to work properly, and the preliminary results show an interesting, similar range of cloud optical depth to marine low-topped boundary-layer clouds. We are in a process of calibrating lidar backscatter and radar reflectivity measurements; the calibrated measurements will then be used along ENCORE to retrieve vertical profiles of cloud and precipitation.

As part of the aircraft field campaign in June-July 2016, we planned and took part in a number of radiation calibration and closure flights with two of the aircraft (the SAFIRE ATR and BAS twin otter).
Each aircraft flew one flight aimed at radiation calibration. Extensive analyses were performed on these two calibration flights to find the optimal coefficients (with uncertainty) for correcting downwelling shortwave fluxes. The corrections were necessary due to aircraft pitch/roll offsets. These correction coefficients have been successfully applied to other flights, and results of radiation closure studies will be reported soon.

The modelling activities in this work package mainly involve radiative transfer, including shortwave and longwave, broadband and spectral.