The deployment of rain gauges has a century-long history and has enabled the observation of a key parameter in the Earth’s climate system at meteorological services and research facilities alike. Apart from monitoring rainfall on a daily basis, long data timeseries from rain gauges facilitate the investigation of the rainfall sensitivity under changing environmental conditions, which is an important aspect in the light of rising global mean temperatures. Furthermore, they serve another vital purpose in the current age of remote sensing: As validation data for rainfall observation from space. Despite the major advantage of the satellites’ capability to provide a global picture of rainfall estimates, the quality of their data can only be assessed by comparing them to direct ground observations. Can satellites reliably monitor extreme rainfall for forecasters in order to issue early warnings for potential flash flood events? Do satellite data show the same climatological trend as ground measurements? These and more questions are and will be of particular importance for West Africa for two reasons: Firstly, it is a region with one of the world’s strongest growth in population, urbanization, and industrialization - but at the same time with a high dependency on rain-fed agriculture and hydropower for the respective economies of West African countries. Secondly, many existing rain gauge networks have turned into a state of disarray over the past few decades, partly due to the lack of financial capabilities, partly due to the lack of political interest. However, a couple of international efforts had been undertaken to mitigate this issue. 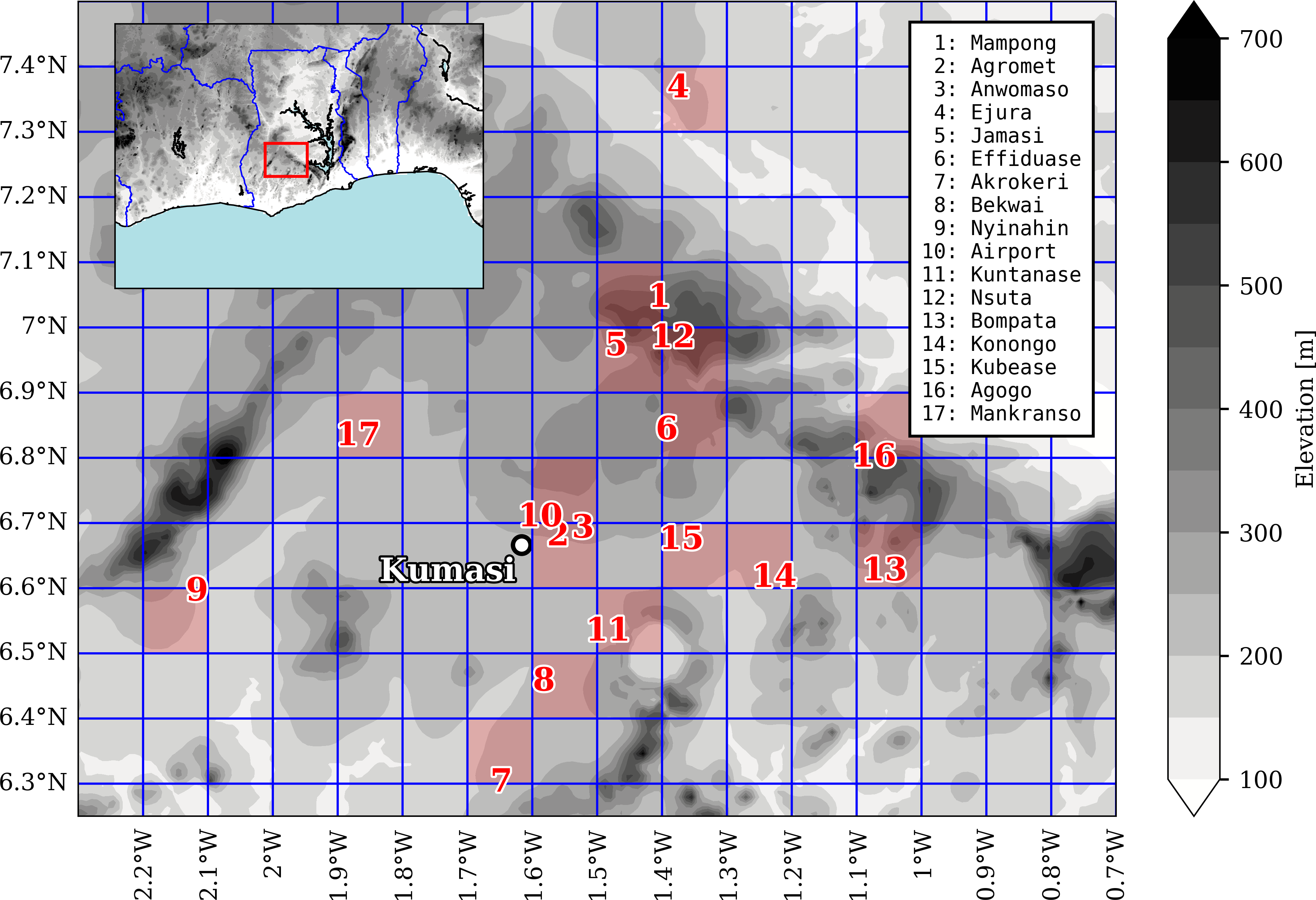 Fig.1: Distribution of the DACCIWA rain gauge stations in the Ashanti region of Ghana (see map inset in the upper-left corner). Each red number represents a rain gauge names given in the top-right inset. The blue grid illustrates the IMERG pixels. RG-associated IMERG pixels that are used for the point-to-pixel comparison are denoted by the light-red shading. The gray shaded background shows the topography of the study region as provided by the Global Land One-km Base Elevation Project (GLOBE; Hastings et al. 1999). Figure 1 from Maranan et al. (2020). © American Meteorological Society. Used with permission.

During the years 2013–2018, the KIT coordinated the international, EU-funded project “Dynamics-aerosol-chemistry-cloud interactions in West Africa” (DACCIWA, https://www.imk-tro.kit.edu/10052.php), which investigated the impact of natural and anthropogenic emissions on human health over the coastal region of West Africa, but also their influence on the dynamics of the West African monsoon circulation on multiple spatio-temporal scales. Within DACCIWA, members of KIT and the Kwame Nkrumah University of Science and Technology (KNUST) in Kumasi (Ghana) initiated the establishment of a mesoscale rain gauge network in summer 2015 that went fully operational at the end of that year. The network consisted of 17 low-cost, but high-precision optical rain gauges measuring on a one-minute basis, which was constantly powered by a combination of a solar panel and a battery to ensure its operation through day and night. Benefiting from a collaboration with the Ghana Meteorological Agency (GMET), many of the rain gauges could be placed within the enclosure of GMET weather stations, which provided safety as well as additional maintenance. Overall, the rain gauges were distributed within a radius of 80 km from the city of Kumasi (see Fig. 1) and has enabled the monitoring of rainfall from stratiform clouds up to intense mesoscale convective systems (MCSs) over the years. Originally intended to run this network until the end of the DACCIWA project in November 2018, many of the rain gauges are still operating to this day thanks to the dedicated efforts of the KNUST staff and ongoing KIT support (see Fig. 2). 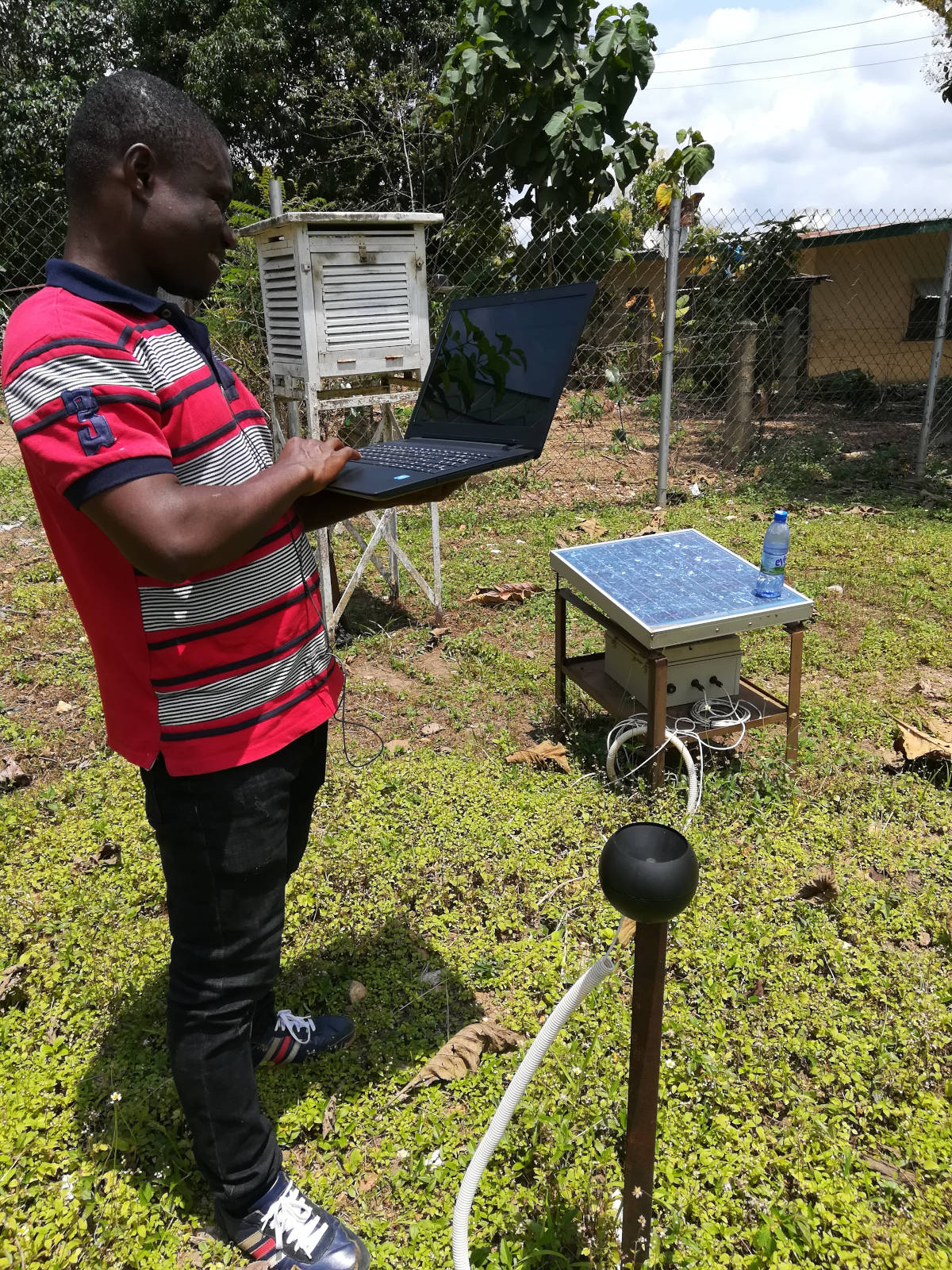 Fig.2: Impression from one of the rain gauge enclosures with a KNUST staff member retrieving the rain gauge data. The rain collector (foreground) is connected to a data logger that sits underneath a solar panel.

In a recent paper by Maranan et al. (2020), data from this rain gauge network were used as a reference for the validation of the satellite-based and globally available rainfall product IMERG (Integrated Multi-satellitE Retrievals for GPM (Global Precipitation Measurement)), which is provided by the National Aeronautics and Space Administration (NASA) and considered as one of the most reliable product of its kind. As one of the first for southern West Africa, the study evaluated the skill of IMERG on a sub-hourly timescale and thus enabled to investigate its performance, among other things, around different types of rainfall systems, such as the aforementioned MCSs. One of the key findings included the underestimation of high rain rates, but also an overestimation of the duration of rainfall by the satellite product. This potentially has negative implications on the internal calibration process of IMERG in such way that extreme rain rates are being attenuated.  Since this hampers the evaluation of potential flash flood events, it is one important aspect to tackle in order to improve the quality of IMERG.

In another future KIT-led West African project called FURIFLOOD (Current and future risks of urban and rural flooding in West Africa – An integrated analysis and eco-system-based solutions) integrated in the WASCAL initiative (West African Science Service Center on Climate Change and Adapted Land Use), we seek the continuation of the network by replacing some existing rain gauges with modern and more durable instruments that additionally allow an easier transmission of data. It is also planned to assemble these replaced rain gauges within a single pixel of IMERG in order to investigate small-scale and subpixel variabilities of extreme rainfall events and, eventually, to create a robust risk assessment of the flash flood potential for West African communities.

last change: 2020-05-18 KIT – The Research University in the Helmholtz Association