Clouds efficiently scatter solar radiation to space and so play an important role in regulating surface heating and determine rainfall distributions across the planet. Knowledge of clouds across the West African region is poor, due in large part because of a lack of measurements to inform, constrain and improve model predictions. Satellite data show that during the West African monsoon in June and July low level stratus clouds that develop during the night are pervasive across the region. During the day, solar heating causes a transition to cumulus clouds that is initiated closer to the coast and progressing inland. There is considerable day to day variability and this behaviour has, to date, not been well replicated in models.

The problem is further complicated since cloud properties are influenced by aerosol particles, which act as sites onto which water condenses when a cloud forms. The greater the number of aerosol particles, the more cloud droplets will be present in a cloud, enhancing the scatter of sunlight back to space and reducing the likelihood of the droplets growing to the size where they can coalesce and initiate rainfall. In the west African region, increasing population and rapid industrialisation are changing the composition of the atmosphere and enhancing these particles greatly. This is likely to impact cloud properties but, prediction of these changes is complex and computer models have little available data in the region against which predictions can be tested.
Science Activities:

The main objective of this work package is to quantify cloud microphysical and dynamical behaviour across the west African monsoon, with particular emphasis on the influence the variety of aerosol sources across the region have on stratus, cumulus and congestus clouds and their transition.The specific objectives are to:

The field intensive took place between 25th June and 17th July 2016 and involved all three aircraft: the ATR-42 of SAFIRE, France; the DLR Falcon; and the British Antarctic Survey Twin Otter. The aircraft intensive experiment was extremely successful and has delivered considerable data that is being used to describe the clouds across the West African region and provide data to test computer model studies of cloud systems and aerosol-cloud interactions. The 3 aircraft flew 50 missions in the period between 29th June 2016 and 16th July 2016. In total 23 flights were dedicated to aerosol-cloud interactions, amounting to 70 h of data from all 3 aircraft. Of these, 32 h were conducted on a transect between Lome and Savé, 10 h were spent in the region between Lomé and Kumasi, around 11 h of cloud sampling was carried out between Lomé and Abidjan, and around 17 h of aerosol and cloud focussed activity took place more broadly across the region.
This represents a very rich data set, by far the greatest amount of information on clouds and aerosols ever amassed across West Africa that will provide important information for studies of cloud and how they are influenced by pollution. This is particularly important in West Africa since the region is only at the start of what will be a period of huge economic and population change in the coming years and assessing how this influences the cloud system will be very important. 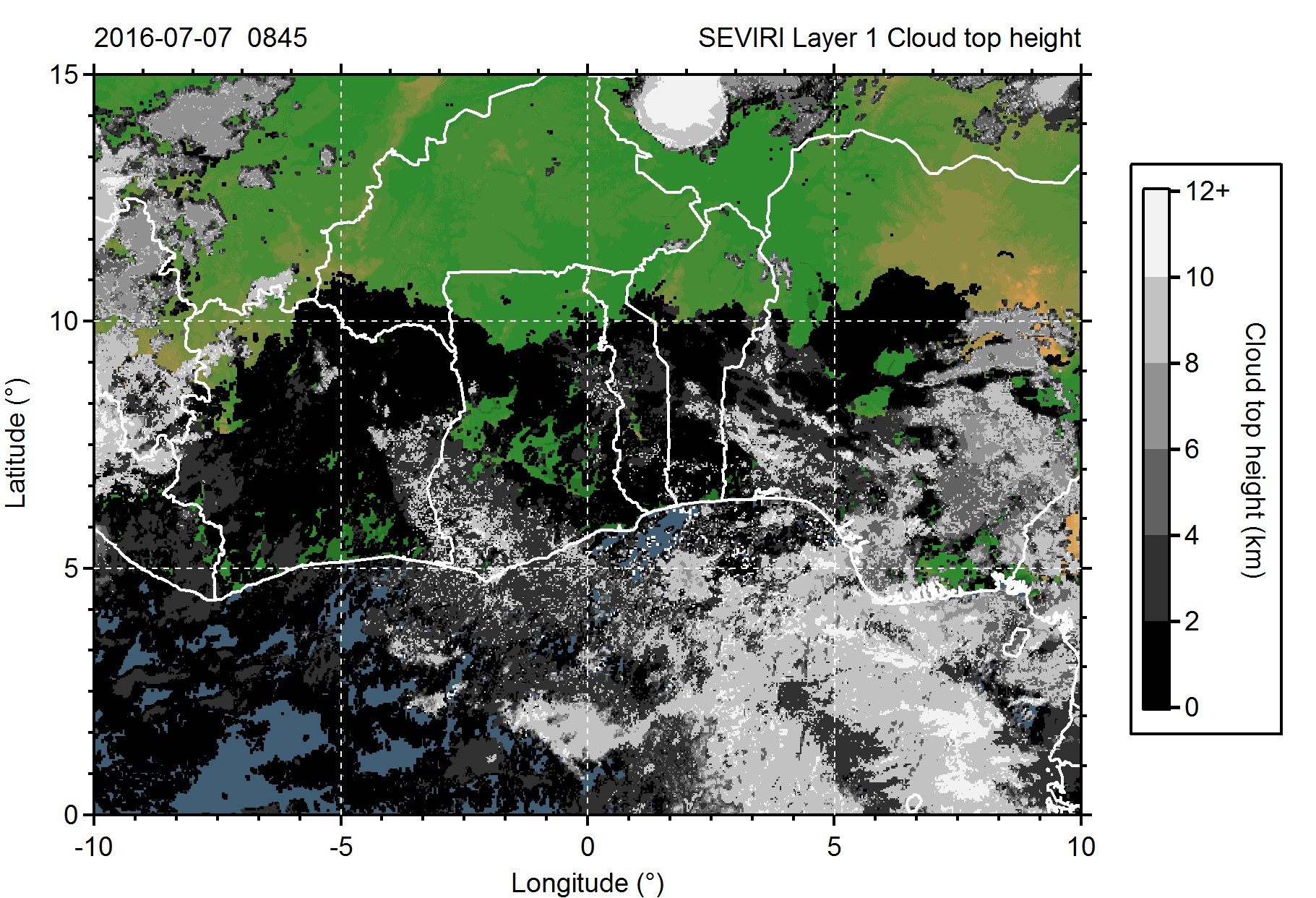 Cloud top height retrieved from the SEVIRI instrument on ENVISAT for 08:45 on 7th July 2016. Extensive low
level stratus can be seen in the dark shading across most of the West African continental region. Such extensive
stratus is observed widely across West Africa in the morning after forming overnight. 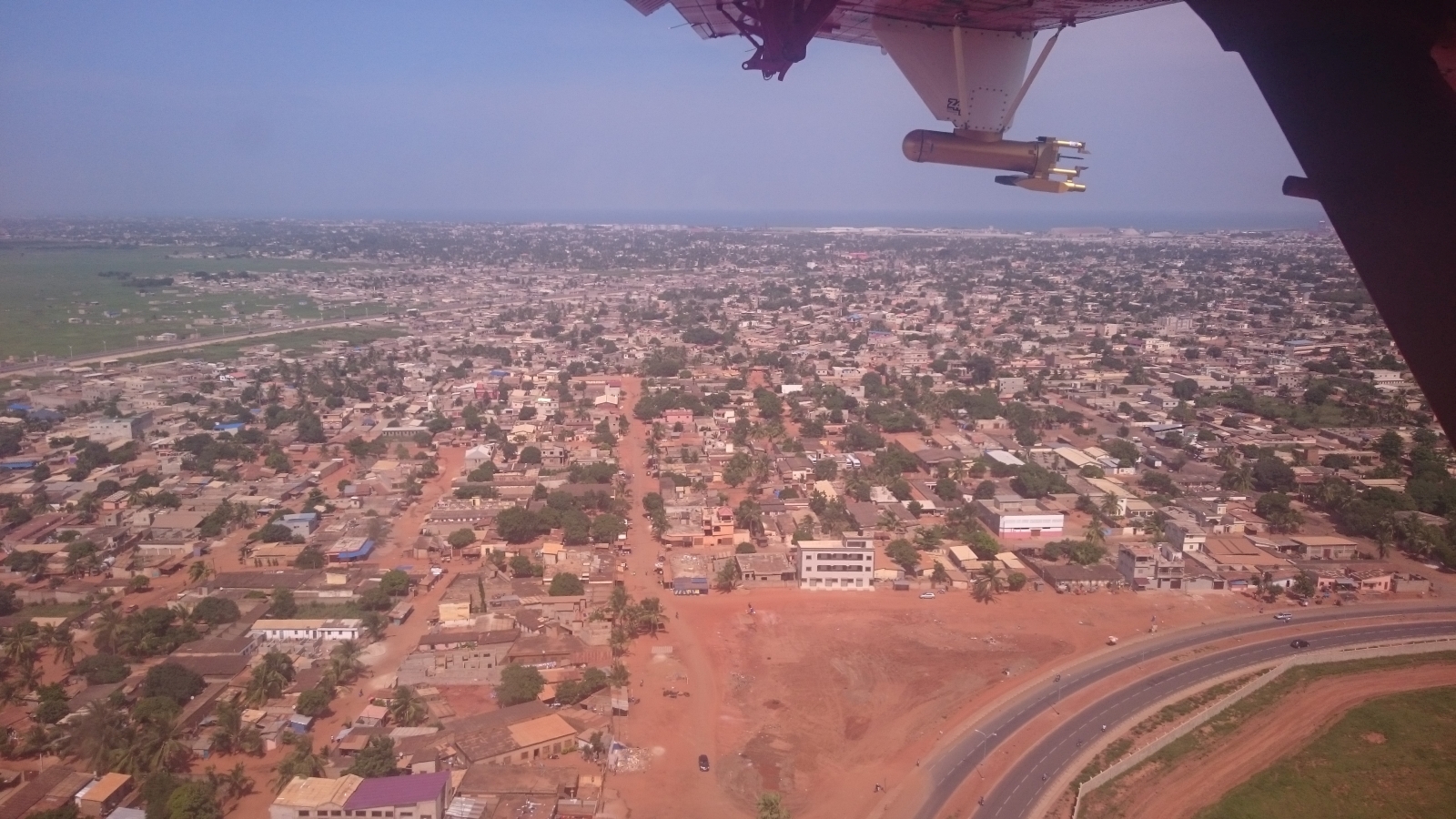 The city of Lome, home operating base for all 3 DACCIWA research aircraft.