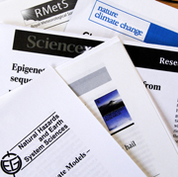 A statistically significant link is presented between atmospheric blocking located over the eastern North Atlantic and northern Europe and warm season thunderstorm activity over western and central Europe. Lightning data from 2001 to 2014 were used to identify thunderstorm days and blocking events were extracted from the ERA‐Interim reanalysis using an objective identification algorithm. The statistical link between the two phenomena is established by the odds ratio analysis. Two areas one over the eastern part of the North Atlantic and one over the Baltic Sea were identified, where blocking influences the occurrence of deep moist convection in parts of western and central Europe.

Based on the mean ambient conditions on days with blocking in these two areas, well‐known dynamic and thermodynamic mechanisms supporting or suppressing the development of thunderstorms were confirmed. The anticyclonic circulation of a block over the eastern part of the North Atlantic leads to a northerly to northwesterly advection of dry and stable air masses into Europe on the eastern flank of the block. In addition, these environmental conditions are on average associated with large‐scale subsidence of air masses (convection‐inhibiting conditions). In contrast, the southerly to southwesterly advection of warm, moist and unstable air masses on the western flank of a block over the Baltic Sea results in convection‐favouring conditions over western and central Europe. Both blocking situations are on average associated with weak wind speeds at mid‐tropospheric levels and with weak wind shear. As a consequence, thunderstorms related to atmospheric blocking over the Baltic Sea tend to be on average less organised.


last change: 2019-07-02 KIT – The Research University in the Helmholtz Association