One aim of CORDEX is to produce in a coordinated manner multi-model ensembles of regional climate projections for various regions of the world. For the regional projections new global model simulations carried out within CMIP5 will be downscaled. Results of the regional downscaling are used for impact and adaptions studies and as input for the IPCC 5. Assessment Report. Africa was chosen as a key target region due to its vulnerability to climate change.

Within the CLM-Community IMK-TRO was coordinating the CCLM based CORDEX Africa simulations. This is done in close cooperation with other member institutions of the CLM-Community, namely the

1. The evaluation of CCLM for the period 1989 until 2008 using ERA-Interim data as forcing data. The simulations were carried out with the CORDEX standard grid-spacing of 0.44°, and in addition, with the higher resolution of 0.22°. These simulations have been performed partly by PIK, Potsdam, and partly by IMK-TRO, where IMK-TRO used the computing facilities at HLRS, Stuttgart.

2. The downscaling of the results of four different GCMs for the historical period 1950 until 2005 and the future period 2006 until 2100. For the projections from 2006 till 2100, two emission scenarios have been used, RCP4.5, and RCP8.5. The GCMs whose data were used for the downscaling are MPI-ESM-LR, HadGEM2-ES, CNRM-CM5, and EC-EARTH. The simulations have been carried out with the CORDEX standard grid-spacing of 0.44°. Thus, taking into account four driving GCMs and two scenarios, an eight member ensemble of climate projections for Africa has been created. In addition, a simulation with a spatial resolution of 0.22° has been carried out for the historical period 1950-2005 using MPI-ESM-LR. All downscaling experiments have been performed at DKRZ, Hamburg, using their modelling environment IMDI (Integrating Model and Data Infrastructure). The simulations have been carried out in a domain that comprises the official CORDEX Africa evaluation domain (Fig. 1). 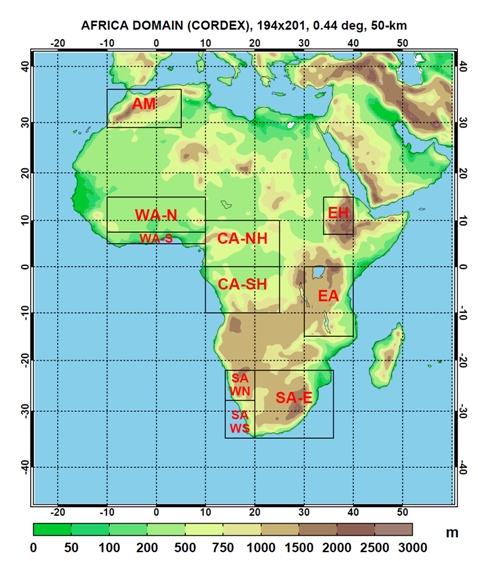 The ERA-Interim driven evaluation simulations for the period 1989 - 2008 showed that CCLM is able to reproduce the basic features of the African climate, e.g. the seasonal variation of the precipitation distribution (Panitz et al., 2012), within the variation of the observational data sets. The results of the 0.44° and the 0.22° simulations look quite similar. 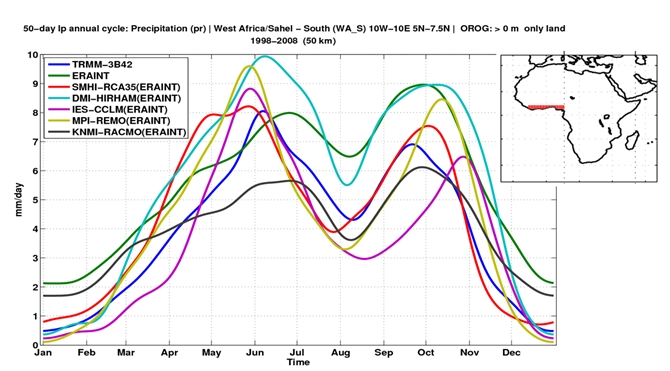 Average climate change signals for the near future (2031-2060) and the end of the 21st century (2071-2099) have been calculated for the whole African continent, including Madagascar, and 10 African sub-regions (see Fig. 1). The reference period is the 30-year period 1971-2000. Although all simulations are consistent with respect to the sign of the change, an increase of temperature and a decrease of precipitation, the spread of the results is rather large, especially for precipitation. With respect to the nearer future, the HadGEM2-ES driven runs show the largest increase of temperature, but the smallest precipitation change. The changes resulting from the downscaling of EC-EARTH and ECHAM6 are rather close together, and they show the largest decrease in precipitation. For CNRM-CM the temperature change is the smallest with less than 1.5 K for RCP4.5 and less than 2 K for RCP8.5. On the average the conditions in the nearer future become drier by about 6%, and warmer by about 1.7 K and 2.2 K for RCP4.5 and RCP8.5, respectively (Table1).

At the end of the century the mean African climate might become warmer, up to about 4.7 K for the RCP8.5, and still drier (Table 1). Again all four CCLM simulations show the same climate trends, but again with varying strength.

The strength of the climate change signals does not only depend on the forcing data but also on the region. The average temperature increase is weakest in the Gulf of Guinea region (WA_S), and strongest over the Ethiopian Highlands (EH) and in northern South-West Africa (SA_WN). Considering the whole year, the decrease of precipitation is weakest in the monsoon areas and strongest in the region of the Atlas Mountains (AM) and the southern African regions; there is,however, a rather large variability between the results of the single ensemble members.

Table 1:
Average climate change signals (means over the CCLM CORDEX Africa ensemble) for the nearer future (2031-2060) and the end of the 21st century (2071-2099) for the whole African continent, including Madagascar. The reference period is 1971-2000.The future period ends in 2099 since the HadGEM2-ES model did not provide forcing data for 2100