Weather regimes govern an important part of the variability of the midlatitude circulation on the sub-seasonal time scale and on continent-size regions. Quasi- stationary, long-lasting anticyclones deviating the midlatitude jet "block" the mean westerly flow and play a key role in influencing weather variability. Due to their association with high impact weather and due to their longevity, regimes that feature such a "blocking anticyclone" are of particular importance. The correct representation of blocked-regime life cycles presents a major challenge for current numerical weather prediction models as they struggle with the prediction of the onset and decay of atmospheric blocking that results in large forecast errors at the medium- range to sub-seasonal timescale.

During this PhD project, we investigate the underlying dynamics of blocked-regime life cycles from a potential vorticity (PV) perspective. We identify the typical evolution of PV-anomalies during the life cycles and adopt a local PV-budget framework to quantify the processes governing the regime life cycles. Overall, we aim at synthesizing insight into the role of i) "dry" and "moist" contributions and ii) wave dynamics and more local mechanisms. This PhD project is part of the Collaborative Research Center SFB/TRR 165 "Waves to Weather" within project A8: "Dynamics and predictability of blocked regimes in the Atlantic-European region" funded by the German Research Foundation (DFG). 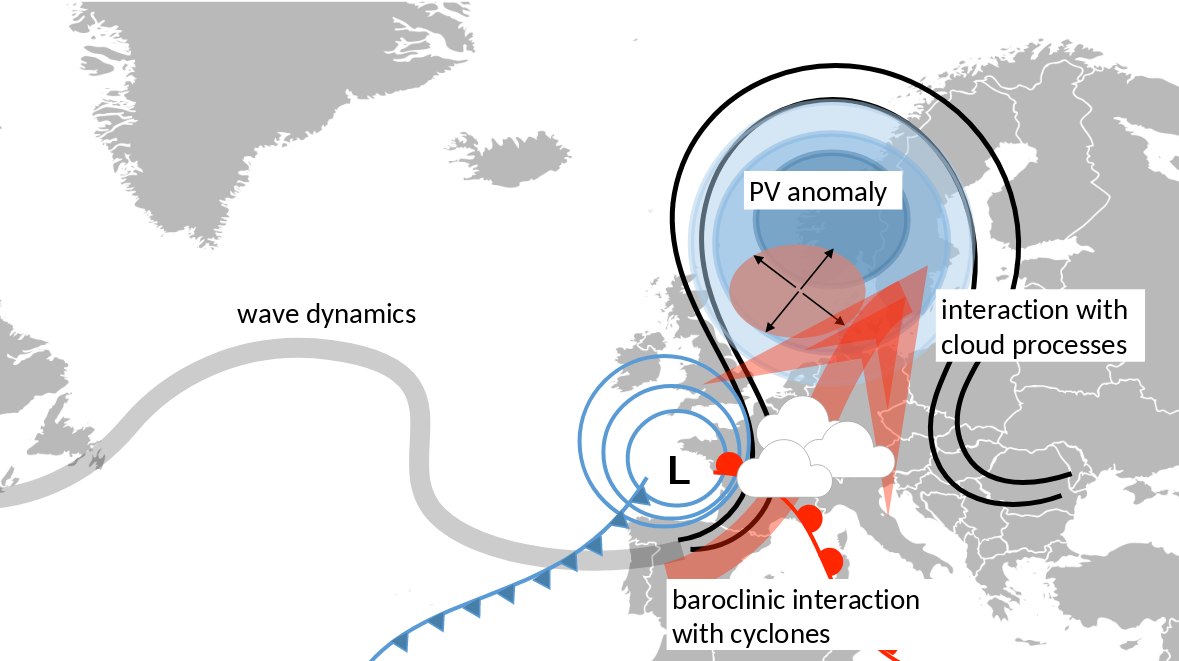 The characteristic large-scale cloud band in extratropical cyclones is often formed by a coherently and strongly ascending airstream, the so-called warm conveyor belt (WCB). During its cross-isentropic ascent from the boundary layer into the upper troposphere, the WCB transports air into the upper troposphere which can significantly influence the large-scale flow evolution. The cross-isentropic ascent and the WCB outflow strength in the upper troposphere are strongly driven by latent heat release from the formation of liquid, mixed-phase and ice clouds. In this way, WCBs provide an environment where small-scale cloud microphysical processes are directly linked to the large-scale atmospheric circulation in extratropical cyclones. In numerical weather prediction models microphysical processes need to be parameterized, which introduces uncertainties in their representation. These uncertainties in microphysical process rates directly influence in- and below-cloud latent heating, and also the potential vorticity distribution nearby. Thereby, these uncertainties can feed back on the larger-scale flow.

In this project, which is part of the Transregio „Waves to Weather“ (project B8), we analyse the impact of cloud microphysical processes in the extratropics across multiple scales ranging from cloud particles to the large-scale circulation. Therefore, we employ two-way nested ICON simulations of a WCB case study and analyze heating rates of individual microphysical processes and their associated potential vorticity tendencies along online WCB trajectories. To investigate the sensitivity to microphysical parameterizations, we simulate an ensemble of sensitivity experiments with systematically varying parameters. With our diagnostic framework, we can systematically explore the parameter uncertainty in microphysical parameterizations and its relevance for WCB ascent and the large-scale flow evolution.

Warm conveyor belts (WCBs) are ascending air streams in the warm sector of extra-tropical cyclones, which are the primary cloud- and precipitation generating flow features in the mid-latitudes. Due to strong cloud-condensational processes, WCB-trajectories are diabatically heated, leading to a cross-isentropic transport of air from the lower to the upper troposphere.

This so-called diabatic outflow can potentially alter the large-scale flow by deflecting the wave guide pole- and upward, which can lead to ridge amplification and the downstream development of Rossby waves. The correct prediction of WCBs and their concomitant diabatic outflow is therefore crucial for an adequate representation of the large-scale flow configuration in numerical weather prediction (NWP), as small-scale errors can be amplified and grow to the large scale.

Diabatic processes, being an important factor determining the development of WCBs, are parametrized for the most part in NWP models, introducing a source of uncertainty into the forecast. State-of-the-art ensemble prediction systems attempt at representing this error source by perturbing the model physics. At ECMWF, this is done by applying the Stochastically Perturbed Parametrization Tendency (SPPT)-scheme, which perturbs the net physics tendencies with a random 2D-field. As the magnitude of the perturbation scales with the parametrization tendencies, it is assumed that the SPPT-scheme introduces large uncertainty in regions of WCB-activity.

In this project, we investigate the effect of the representation of WCB-outflow on the configuration of the ensemble with a series of experiments conducted with the ECMWF ensemble prediction system (EPS). The experimental setup consists of ensemble forecasts with disabled model perturbations (without SPPT), disabled initial condition perturbations, and a control experiment with an operational setup.

The evaluation of WCB-properties (such as outflow height, diabatic heating rate, ascent speed) in the different experiments will then yield sensitivities of the diabatic outflow on the SPPT-scheme and the initial condition perturbations. Further, this setup allows for an attribution of forecast uncertainty to either initial condition errors or model errors. 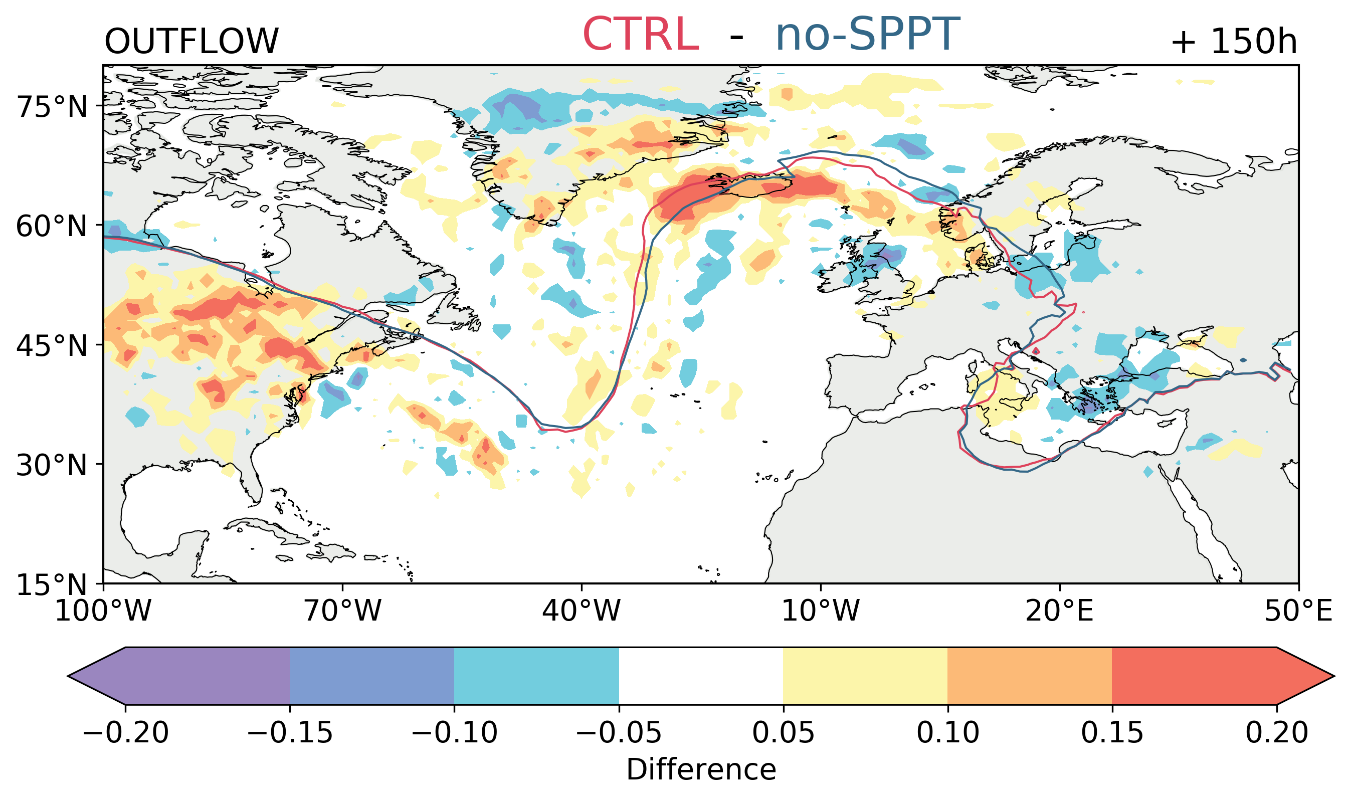 The most rapidly ascending air streams in midlatitude low pressure systems are referred to as warm conveyor belts (WCBs). The physical and dynamical processes associated with it have a major impact on the large-scale midlatitude dynamics and are major sources of forecast uncertainty. Thus, an adequate representation of WCBs is desirable in numerical weather prediction models. Most often, WCBs are identified as trajectories that ascend in a time interval of two days from the lower troposphere to the upper troposphere. Although this Lagrangian approach has been proven to advance our understanding of the involved processes significantly, the calculation of trajectories is computationally expensive and requires data at a high spatial and temporal resolution. Currently, we are developing a logistic regression model that identifies the inflow, ascent, and outflow phases of WCBs from standard synoptic fields. This statistical framework will allow us to evaluate the representation of WCBs in large datasets such as ensemble sub-seasonal reforecast data or climate model output. 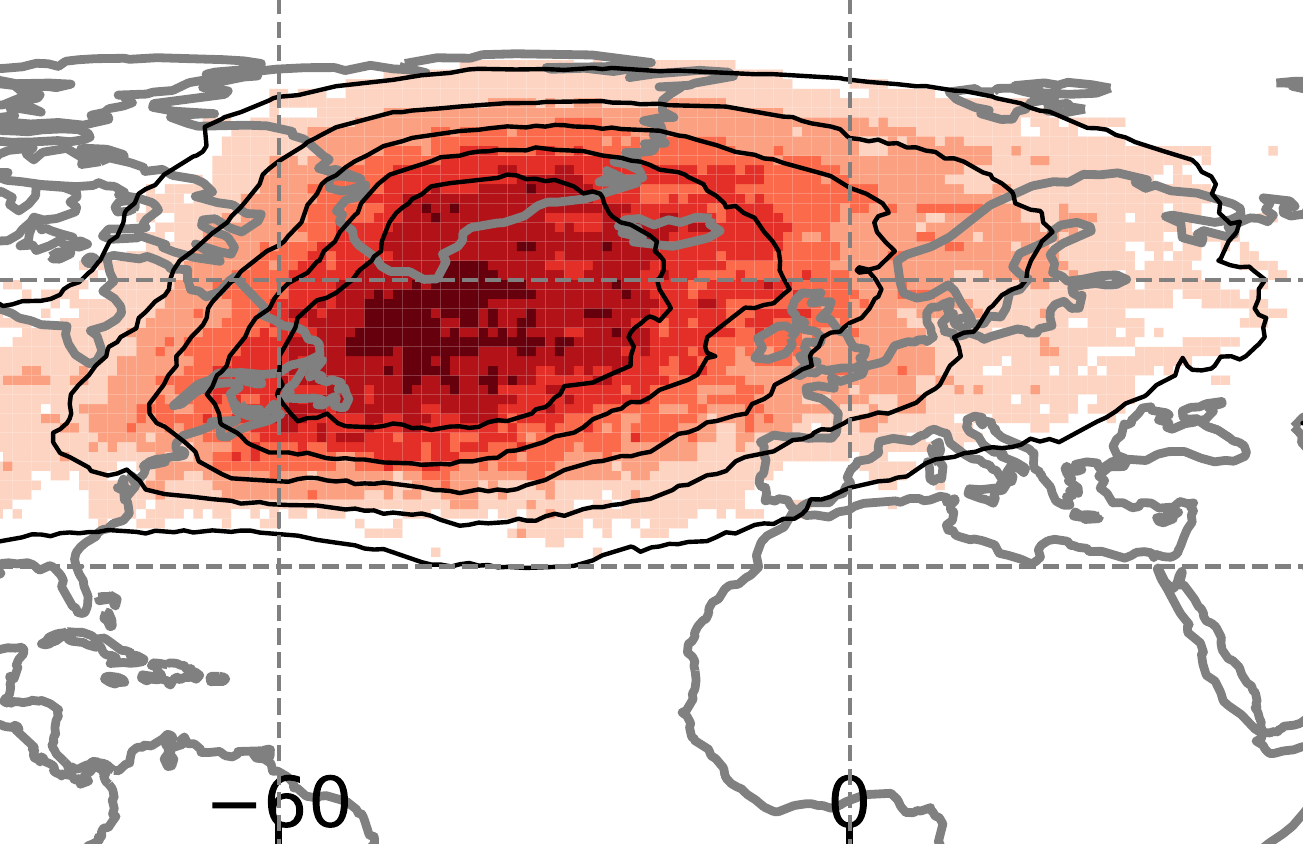