As part of the Swabian MOSES measurement campaign of the Helmholtz research centres and universities in Baden-Württemberg, the working group "Atmospheric Risks" carried out mobile measurements with the swarm sondes "Windsond". Swabian MOSES is a hydro-meteorological measurement campaign that was carried out between May and September 2021 in the Neckar valley and on the Swabian Alb in southwest Germany. It focused on two hydro-meteorological extremes that are of great relevance not only for the study area: Local-scale convective cells (thunderstorms) associated with heavy rain and hail, and large-scale heat waves and the associated droughts. MOSES (Modular Observation Solutions for Earth Systems) is a novel observation system of the Helmholtz Association, developed by the Helmholtz Centres in the research field "Earth and Environment" and established as a cross-cutting activity in the programme Changing Earth - Sustaining our Future 2021-2027.

The vertical temperature and moisture profile of the atmosphere is decisive for the formation and intensity of thunderstorms. In addition, the 3D wind field (especially in the upwind region of a thunderstorm) determines the severity of precipitation in the form of rain or hail. With the help of the small (coffee cup-sized) and lightweight (12 g) swarm sondes Winsond from Sparv Embedded 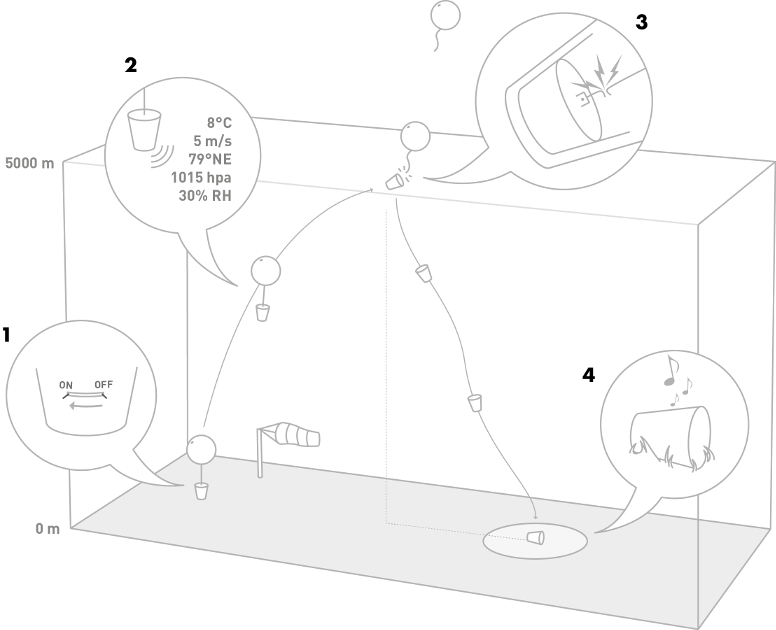 (https://windsond.com), vertical profiles of air temperature, humidity, pressure and the 3D wind field can be measured in mobile use in the vicinity and directly in a thunderstorm. The sondes transmit the measured parameters to the mobile ground station every 4 s. A real-time map continuously shows the position of all sondes. The swarm sonde is a new type of measuring instrument that delivers several series of measurements in a defined volume of air for up to one hour. Up to 17 balloon-carried sondes can be launched simultaneously and in front of or in the immediate vicinity of a thunderstorm. The probes ascend to a user-defined height and then follow the flow in the thundercloud on so-called Lagrangian paths.

The individual sondes can be separated from the balloons either by remote command or from a previously defined height and thus fall to the ground. Due to their low weight, the fall speed and thus the impact on the ground is low, allowing the sondes to be used several times (if they are re-found).