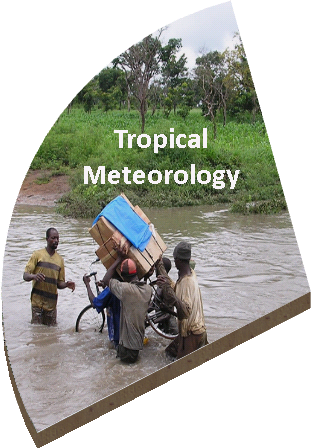 The Tropics, i.e. the area between the tropics of Cancer and Capricorn, cover about 40% of the Earth’s surface. Throughout the year the earth-ocean-atmosphere system gains energy in this region, which drives important components of the general circulation such as the Hadley cells, the “El Niño-Southern Oscillation (ENSO)”, monsoons and not least tropical cyclones. Including the subtropical parts of northern India and East Asia that are influenced by the Asian monsoon, the majority of the world’s population lives in the tropical climate zone – with tendency to rise.

Food security and livelihoods in many tropical countries depend on rain-fed agriculture and therefore on abundant but not too extreme precipitation, the most important climate parameter socio-economically in the Tropics. The predictability of tropical rainfall on time scales from few hours to several days, in many regions also on seasonal and decadal timescales, however, is surprisingly small. A prime example is the region of the West African monsoon, one of the research foci of the WG “Atmospheric Dynamics”. During boreal summer, extensive and long-lived convective complexes form in this region, some of which turn into seedlings for Atlantic hurricanes after crossing the West African coast. Numerical simulations of these cloud complexes, which often span more than 100,000 km², require a solid understanding and sound representation of surface energy fluxes, of turbulent fluxes of energy and momentum in the planetary boundary layer and in the thunder clouds as well as of cloud microphysical processes, which are influenced by Saharan dust and anthropogenic aerosols.

These enormous tropical thunderstorms cause an efficient interaction between small-scale processes near the surface and the larger-scale circulation. These complex processes are not resolved or simulated realistically in global weather forecast models. In a hitherto unprecedented comprehensive study regarding the predictability of convective rainfall over northern tropical Africa, Vogel et al (2018) demonstrated that nine numerical global weather forecast models did not provide more skillful forecast than statistical methods based on past observations. in turn, large-scale tropical and extratropical wave phenomena impact on the initiation and growth of tropical thunderstorm complexes. Members of the WG “Atmospheric Dynamics” have shown this in recent publications for southeast Asia (van der Linden et al. 2016; van der Linden et al. 2017) and West Africa (Engel et al. 2017; Knippertz et al. 2017).

An innovative research approach that members of the WG pursue at the moment in collaboration with colleagues from Applied Mathematics is to test if the better predictability of large-scale wave phenomena can be utilized in statistical methods to improve (extreme) rainfall predictions on the ground. Progress would be of immediate benefit for smallholding farmers in tropical Africa and Southeast Asia. 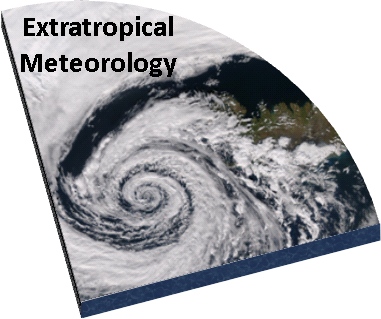 Atlantic winter storms cause the largest economic and insurance losses in Central Europe. Famous examples in Germany are the storms “Lothar” during Christmas 1999, “Kyrill” in January 2007 and “Friederike” in January 2018. Consequently, research on the predictability of such storms on different time and spatial scales has long been a focus for meteorology (Pantillon et al. 2017).

Known “ingredients” for the formation of extreme winter storms over the Atlantic are large temperature contrasts between subtropical and subpolar latitudes in the middle troposphere (ca. 5 km), i.e. a high baroclinicity, a resulting concentrated jet in about 9 km height and the incorporation of near-surface moist, warm and therefore energy-rich air masses of subtropical or even tropical origin. The last aspect, the so-called diabatic forcing of winter storms, has received increased attention in recent years due to the fact that a warming atmosphere has the potential to hold more moisture. For example, members of the WG “Atmospheric Dynamics” have been able to show that Lothar intensified in a more diabatic way while Kyrill was more classically dominated by baroclinic forcing. Also other destructive storms such as Klaus in January 2009 and Xynthia in February 2010 benefited from anomalously high moisture, partly of tropical origin (Fink et al. 2012).

Other topical research questions are related to smaller-scale phenomena at fronts. For example, heavy showers and thunderstorms were embedded in the cold front of Kyrill over eastern Germany, which is a possible explanation for the observed extreme and very heterogeneous peak gusts. Storm Christian in October 2013 caused record gales of up to 180 km/h in Schleswig-Holstein and Denmark, possibly associated with the touch-down of a so called “sting jet”. Reliable spatio-temporal predictions of peak gusts associated with extratropical winter storms remain a large challenge to our process understanding and modelling capabilities.

A long time it was thought that the Tropics had little impact on the weather and climate of the extratropics. This was motivated on the one hand by the idea of a closed tropical Hadley cell and on the other hand by the fact that the transition from extratropical westerlies to equatorial easterlies forms a barrier for Rossby wave propagation in linear, adiabatic theory. The advent of satellite imagery in the 1970s revealed the existence of large cloud bands stretching diagonally into the extratropics, so called “tropical plumes”, as visible evidence of tropical–extratropical interactions.

On the other hand, research in the last 10-15 years in which the WG “Atmsopheric Dynamics” adopted a leading role disentangled the chain of processes involving extratropical Rossby waves that leads to a predictability of dry-season rainfall over West Africa about a week ahead (Knippertz and Fink 2008

). Furthermore, an important role of the extratropics for the onset of the West African monsoon is currently discussed (Knippertz et al. 2017). In the study from van der Linden et al. (2017) it is postulated that an as of yet undocumented form of tropical-extratropical interaction lead to a better predictability of an catastrophic precipitation event in northeast Vietnam in summer 2015.

In the context of tropical-extratropical interactions, our WG conducts research in a world leading positions that ultimately shall lead to improvements in the prediction of tropical rainfall, but also to, for example, subseasonal forecasts of heat waves in Europe. 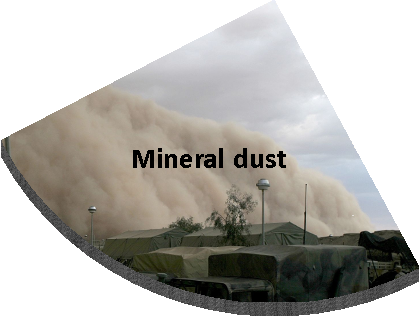 Mineral dust in the atmosphere consists of micrometer-scale particles that are lifted by strong winds over the world’s desert regions and are transported over thousands of kilometres, occasionally also to Germany as for example in April 2014. Every year several megatonnes of such particles are raised into the atmosphere, making mineral dust the most important component in the global aerosol budget in terms of mass.

The tiny mineral dust particles have a number of important impacts on the Earth’s climate system: (1) They reflect and absorb solar and terrestrial radiation and therefore affect the energy budget of the atmosphere. This can lead to changes in regional circulation systems and the planetary boundary layer, which ultimately modify near-surface wind and temperature patterns as well as clouds and precipitation. (2) In clouds they can foster the condensation of liquid water and the formation of ice particles and thereby affect cloud characteristics such as brightness, lifetime and precipitation efficiency and indirectly again the energy budget. (3) They contain iron and phosphorus that after deposition into oceans or rainforests enhance biological activity through fertilisation and this way impact on the Earth’s carbon cycle. In addition, dust plays an important role for the deterioration of air quality, in particular in combination with anthropogenic emission like for example in China, and for horizontal visibility, an important aspect for aviation safety.

However, many aspects of the global dust budget are currently insufficiently quantified. This reaches from physical properties like size, absorption behaviour and hygroscopicity over chemical composition to meteorological conditions for emission, transport and deposition. The WG “Atmospheric Dynamics” has large expertise in the analysis and modelling of dust storms and their representation in numerical models (Knippertz and Todd, 2012

). Dust storms occur in different forms and sizes, stretching from dust devils with diameters of few meters to almost continental-scale outbreaks in connection with high- and low-pressure systems. Members of the group have recently quantified the contribution of cold pools generated from deep convective systems to dust emission over Africa for the first time, demonstrating considerable problems in the representation of this process in models (Marsham et al. 2011

, Pantillon et al. 2016). Almost all mechanisms of dust emission are subject to a marked diurnal cycle, which is related, among other things, to the formation and breakdown of nocturnal low-level jets (Fiedler et al. 2013

). Most of these pose considerable challenges to our dynamical understanding and modelling.

You will find more information about dust in the book “Mineral Dust - A Key Player in the Earth System” by P. Knippertz and J.-B. W. Stuut published in 2014.