Convection is a process that provides for the redistribution of momentum, heat, and water as well as of natural and anthropogenic trace gases in the atmosphere. Hence, convection exerts a major influence on weather and climate as well as on the quality of breathing air. Convective systems range from small-scale thermics to mesoscale convective complexes. As a consequence, their transport efficiency varies considerably.

Work of the Convective Systems group focuses on:

Apart from ground-based vertical sounding systems, a research aircraft of the type DO 128 as well as a dropsonde system are applied to determine convection. Using ground based and airborne platforms, we are doing process studies on different scales in the field of convection to understand the triggering of convection over complex terrain (e.g. low mountain ranges) and to determine, which amout of transport of heat, humidity and trace gases are caused by convection. These transports influence air quality and weather as well.

Thermal stability of atmospheric stratification as well as secondary circulation systems play an important role in triggering of convection over hilly and mountainous terrain. The different phases of the development of convection have been described by the analysis of several process studies, i. e. measurements within the atmosphere. By clicking the key words, detailed results of the specific step of the development of convection will be displayed. The acronyms in brackets point to the projects, the specific results are derived from.

Please have a look at our projects, publications, posters and scientific reports or get in contact with our team. 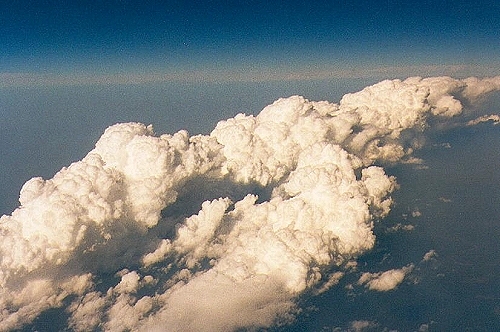 Cumulus clouds over the Ukraine at about 5 pm local time at July 26, 2000.
The triggering of the clouds was caused permanently over a rather small area at the ground.
You can see the driftage of the clouds regenerated over a long time.