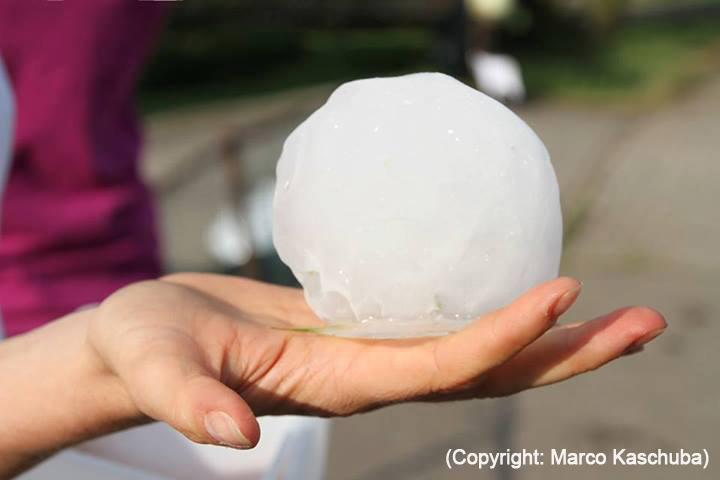 In the past decade severe hail damage in southern Germany, Austria and Switzerland has increased considerably and has become one of the natural hazards with the highest annual amount of loss. Hailstorms in 2013 in Germany led to an insured loss of almost 3 billion Euro.

The spatial extent of the hail tracks and, consequently, the damaged areas, are strongly limited, with widths from a few 10 m to several 10 km. This local boundary makes the systematic recording of hail storms as well as their statistical evaluation harder. First analyses by IMK about the regional probability of occurrence show considerable differences that occur due to large scale climate conditions as well as to local scale influences from the orthography.

The project HARIS-SCM (hail risk damage modeling) now addresses the problem of risk modeling of hail damage and builds on the results of the previous HARIS-SV project. The focus here is on both the hazard analysis and on the vulnerability analysis of hail and hail damage. The goal is to significantly improve the accuracy of the hail damage model for buildings.

First, we generate an update of the risk analysis with new radar data and a revision of the train tracks. In addition, the development of various routines for the correction of incorrectly detected train paths should improve the precision in hail detection with radar data as a proxy. The newly created catalog of potential hail events, which will be extended by 2017, serves as the basis for a stochastic hail-train model, which will be revised and improved as part of this project.

In addition to describing the hazard as accurately as possible, the vulnerability of the objects contained in a given portfolio to the impacting threat plays a decisive role. For this reason, the HARIS-SCM project includes, in addition to the hazard analysis, a detailed vulnerability analysis of past hail damage and accurate calibration of the best possible vulnerability functions. With the derived vulnerability curves, possible damages of the hail tracks can be calculated with a stochastic hail model. The simulation of an appropriatehigh sample of stochastic hail tracks enables a robust estimation of maximum possible damage with a return period of 200 years (PML200).

Furthermore, the IMK-TRO will take on an advisory role in the course of the project for SV SparkassenVersicherung for all questions concerning hail and hail damage. In addition, a model version is operationally commissioned to estimate the damage of current events in real time. In addition, the simulations of real damage serve to validate and validate the PML model.

Also in the future, an annual update of the hazard module, the vulnerability and, bsed on this, the hail risk will continue.