In recent decades, severe hailstorms have increased significantly in southern Germany, Austria and Switzerland and have become one of the natural hazards with the highest annual amount of loss. For example, in Baden-Wuerttemberg, more than 40% of the insured damage to buildings caused by natural hazards is related to hail (Kunz and Puskeiler, 2010). This raises the question to what extent the increase of hail losses can be attributed to anthropogenic climate change.

Due to their local-scale extent and a lack of appropriate monitoring systems, thunderstorms and hailstorms are not captured completely or not long enough to derive any conclusions about possible trends. However, certain atmospheric conditions are necessary for the formation of thunderstorms, which can be derived as proxy data (indirect climate data), for example from radiosonde measurements or from regional climate models. In contrast to thunderstorm observations, proxy data such as thunderstorm indices or large-scale weather types are consistently and homogeneously available over a sufficient long-term period and, thus, are also suitable for trend analysis. By comparisons with loss data from insurance companies, it was investigated, which convective indices and large-scale weather situations describe the frequency of thunderstorms best. Note that that these data sets reflect the potential of the atmosphere for deep convection and do not allow any direct conclusions about the actual formation of thunderstorms.

Using trend analyses and significance tests long term time series of hail relevant convection indices (CI) for Germany and central Europe were examined in order to identify changes of the convection potentials in the past 30 to 50 years.
Most of the CI, which consider near-ground temperature and moisture values show an increase in convection-readiness in the last 30 years. This goes especially for Germany, but also many other parts of central Europe. A (most of the time insignificant) decreasing trend only applies for those CI that primarily consider parameters in higher layers of the atmosphere. In particular measuring moisture in the higher atmosphere is influenced considerably by inhomogeneity of the time series which was caused by changing instrument, leading to a negative trend in stability. The examination of the spatial distribution of the thunderstorm potential as climatology as well as the trend show a markedly North-South-gradient for Germany and Europe and a less markedly West-East-gradient, which is due to climate conditions (Mohr and Kunz, 2013).

Figure: Linear trend of the 90% (10%) percentiles of different indices (1978-2009). Red (Blue) indicates an increase (decrease) of the thunderstorm potential within 100km of each radiosonde station.

In order to statistically analyze changes in the thunderstorm or hail potential in the near future, simulation results from different high resolution regional climate models (RCM) were statistically evaluated. Some of the climate calculations were done directly at the IMK by the working group “Regional Climate and Water Cycle” as part of the CEDIM project "Flood Risk in a changing Climate".

Different statistical analyses show that RCMs with a spatial resolution of about 10 km are able to reproduce convective behavior in the atmosphere. However, high thermic instabilities (especially in northern Germany) were under-estimated in all models. Models powered by re-analyses data (ERA-40) show – as does the the radiosonde data – an increase in thunderstorm potential between 1971 and 2000. The reason for this is in particular the increase of moisture in the near-ground atmospheric layers. First analyses for future stability changes in contrast do not show consistent results.

A similar situation can be detected for large scale weather types which were constructed based on different realizations of regional climate models. Four of the 40 different large scale weather types based on the objective classifications of the German National Meteorological Service (DWD) coincide with an increased probability for damage-related hail events. These four weather patterns have increased, even if only slightly but nevertheless statistically significantly, in the time period from 1971 to 2000. For the future (2010 to 2050) the model data only show a small increase of these weather patterns. They are however strongly dependent on the considered time period (Kapsch and Kunz, 2012). 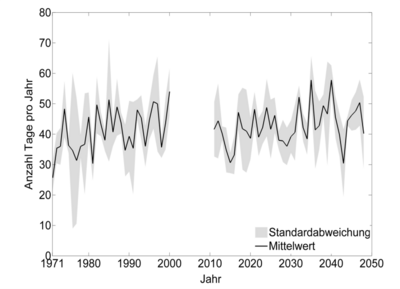 In order to consider further factors relevant for the formation of hail events a logistical hail model was developed using a multi-variant analyses.  This allows for a better diagnostic of hail events.  The mathematical model is based on a combination of selected meteorological parameters (convection parameters, moisture content, etc.) and synoptic weather patterns. The output of the model is a new index that estimates the potential of the atmosphere for hailstorm development, and is referred to as potential hail index (PHI). For Germany the logistic hail model shows a markedly North-South-gradient with the largest number of potential hail event days in the south. Applied to an ensemble of seven regional climate models , it is found that the potential for hail events will slightly increase in the future. This is valid especially for northwestern and southern parts of Germany.

Figure: Summary of the changes of PHI between PRO and C20 using an ensemble of seven climate simulations. (a) Number of runs that show an increase, (b) only increase/decrease whereby red indicates that 5 to 7 models show an increase or 0 to 2 models show a decrease (blue inverse). (c) same as (b), where only changes count if they are more than 0,5 larger than that run, and (d) same as  (b), where only changes count that are larger than 1.

Mohr, S., Kunz, M. and Keuler, K. (2015): Development and Application of a Logistic Model to Estimate the Past and Future Hail Potential in Germany. J. Geophys. Res. Atmos..