The project conducted within the frame of the “Risk Map Germany” of the Center for Disaster Management and Risk Reduction Technology (CEDIM) aims at deriving storm hazard and risk maps for Germany. The results provide estimates about the current probability of extreme wind speeds in a high spatial resolution of 1 km x 1 km.

Wind storms are referred to as heavy wind events associated with different weather systems. It is distinguished – with decreasing spatial scale – between extratropical storms (winter storms), tropical storms, foehn, convective gusts, and tornadoes. Due to the large spatial extent of the wind fields up to 1000 km and more, extratropical storms are responsible for more than half of all economic losses caused by natural hazards in Germany. Single storm events with a low probability of occurrence exhibit a damage potential in excess of 10 Bn €, as documented by the severe storms of Lothar on 26.12.1999 or Kyrill on 18.01.2007. Decisive for the storm damage are the short-term fluctuations of the wind speed, referred to as gusts. Depending on the terrain’s roughness, the gusts may exceed the mean velocities by a factor between 1.5 and 2.

Storm hazard maps provide information about the probability for a certain wind speed or vice versa. To account for the temporal and spatial variability of the wind speed, either high-density observation networks or highly resolved model simulations are required. Application of extreme value theory to storm fields over a climatological period (e.g., 30 years) yields wind speeds for a certain probability or return period. Such an approach was conducted to derive the CEDIM storm hazard maps (Heneka et al., 2006; Hofherr and Kunz, 2010).

Spatially highly resolved wind fields of severe storm events between 1971 and 2000 are modeled by a statistical-dynamical downscaling approach with the Karlsruhe Atmospheric Mesoscale Model KAMM, using both ERA-40 re-analysis from the European Centre for Medium Range Forecast (ECMWF) and observation data. Depending on land-use, empirical gust factors are applied to the modeled mean wind speeds. Hazard curves, including quantification of the uncertainties, are determined for all grid points with a distance of 1 km from the simulation results by applying extreme value statistics. Comparisons of model data and observations confirm the applicability and the high precision of the method.

The hazard maps reveal critical regions with potentially extreme wind speeds depending on exposure, terrain height and land use. For an exceedance probability of 0.2 yr–1 that equals a return period of 5 year, the maximum gusts range between 23 m s–1 in deep valleys and >40 m s–1 near the coast as well as over the crests of the low mountain ranges. Particularly saddles, edges, flanks and summits feature a higher hazard for extreme wind speeds.

The data of the wind hazard map for different return periods can be requested from the Institute for Meteorology and Climate Research (IMK-TRO) of KIT.

In the frame of the project, both vulnerability and damage functions for residential buildings were described to quantify storm losses depending on the wind speed. This work was carried out by the Institute for Hydromechanics (IfH) at KIT (Heneka et al., 2006; Heneka und Hofherr, 2011). The damage model was developed and calibrated with damage data from historic storm events. Integration of risk curves yields mean annual loss caused by winter storms.

Further, it is possible to estimate or predict the loss related to single storm events. More information on the risk data will be provided by CEDIM. 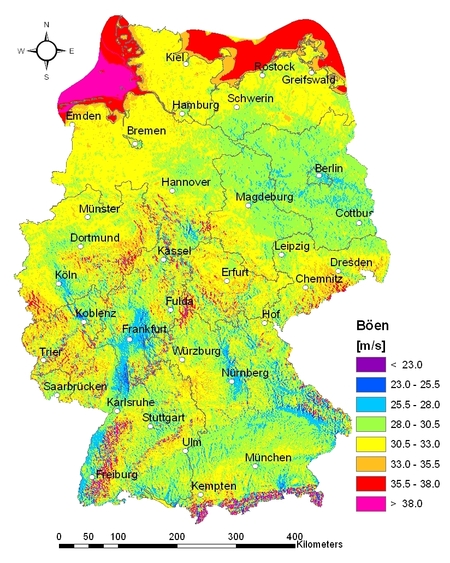