ClimXtreme A5: The role of multi-scale dynamical processes in shaping recent and future extreme heat waves over Germany (DynProHeat)

The subproject A5 („DynProHeat“) of ClimXtreme deals with the role of atmospheric dynamics in shaping present and future heat waves in Germany. Climate projections show with high confidence that heat waves intensify over the 21st century – a trend that can already be observed nowadays. While local effects of soil moisture deficits have been well established as a contributing factor to future more frequent and more intense heat waves, few studies have been conducted that focus on more remote factors, e.g. via the influence of a changing atmospheric circulation on these events. Necessary conditions for heat waves in Central Europe are slow-moving or stationary high-amplitude Rossby wave trains in the upper-level flow. The upper-level ridges correspond with a strong high-pressure system in the lower troposphere. Therefore, group and phase velocities of Rossby wave packets, the occurrence of Rossby wave breaking and blocking are diagnosed in reanalyses and higher-resolution climate projections (CMIP5, CMIP6 HighResMip, MPI-ESM, CESM-Large Ensemble, CORDEX II Europe).

In addition, the origin, transport and modification of air masses and air parcels are quantified by trajectory analyses with the program LAGRANTO. Thereby, the important physical processes for the evolution and persistence of heat waves (temperature advection and adiabatic compression, surface heat fluxes in the boundary layer) can be compared with each other and uncertainties in the climate projections can be quantified and potentially reduced. Finally, the question whether atmospheric dynamics intensify the most extreme heat waves even more than expected, can be answered. 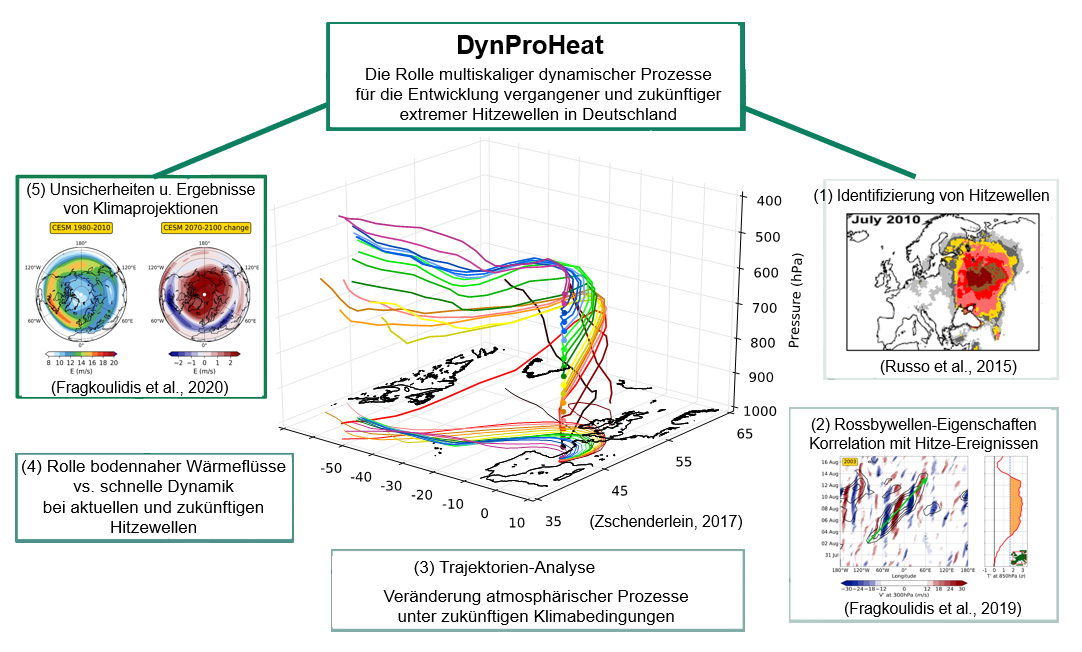