Extreme atmospheric and hydro-meteorological events such as storms and storm surges, hail, floods and heat waves seem to be to increase more and more. It seems that the weather is going crazy more and more often. This is why scientists, the media, politicians, administrations, insurance companies and the general public are increasingly asking the question: What role does climate change play in the context of extreme weather events (EWEs) and to what extent does this contribute to their frequency and increase and decrease in intensity?

Thus, the topic is highly topical and actual research is focusing on the question how and to what extent climate change currently influences the different EWEs - depending on their region - and which changes can be expected in the future. First research results have already shown that changes in the frequency or intensity of certain EWEs - such as heat waves or winter storms - can be attributed to climate change. In addition to a change in the vulnerability of goods, a change in the exposure of values and the impact on humans as a whole, global warming will also have an additional impact on global and national damage and loss rates caused by weather extremes, as well as on regional and local levels. In this respect, a public understanding of the phenomenon of climate change is emphatically demanded by science, politics and administration in order to sensitize people to this problem and to increase their readiness for mitigation and adaptation measures, especially with regard to weather extremes.

It is precisely the point at which the present research project "Regional risk cultures of extreme weather events" will address. Starting from a lifeworld perspective and beyond scientific or media assessments, it focuses on the concrete social and cultural experience as well as on the perception and evaluation of EWEs. Thus, regionally typical EWEs such as storm and storm surge on the North Sea coast in Schleswig-Holstein, hail events and heat waves in Baden-Württemberg or flood events in Central Germany will be analyzed from a socio-cultural perspective in order to investigate human-extreme weather interactions and regional risk cultures. As a first step, the first aim of the project is to gain a better understanding of the social and cultural dimensions and their connection with EWEs region-specific conditions. Subsequently, the regional experience with and knowledge of weather extremes, individual and collective risk perception, interpretation and risk action will be placed in a regionally specific context..

In the context of the project, the following scientific questions will be addressed, in particular in dependency on the different regions will be studied:

The project "Regional risk cultures of extreme weather events" is split into two phases: In the first phase, street surveys on EWEs will be carried out at selected locations in Baden-Württemberg, on the North German North Sea coast and in Central Germany. In a second phase, the results of these quantitative surveys will be analytically and empirically deepened through qualitative interviews with citizens from the survey locations of the street survey. Finally, the analyzed data sets are combined and - if possible - regionally specific risk cultures are aggregated. 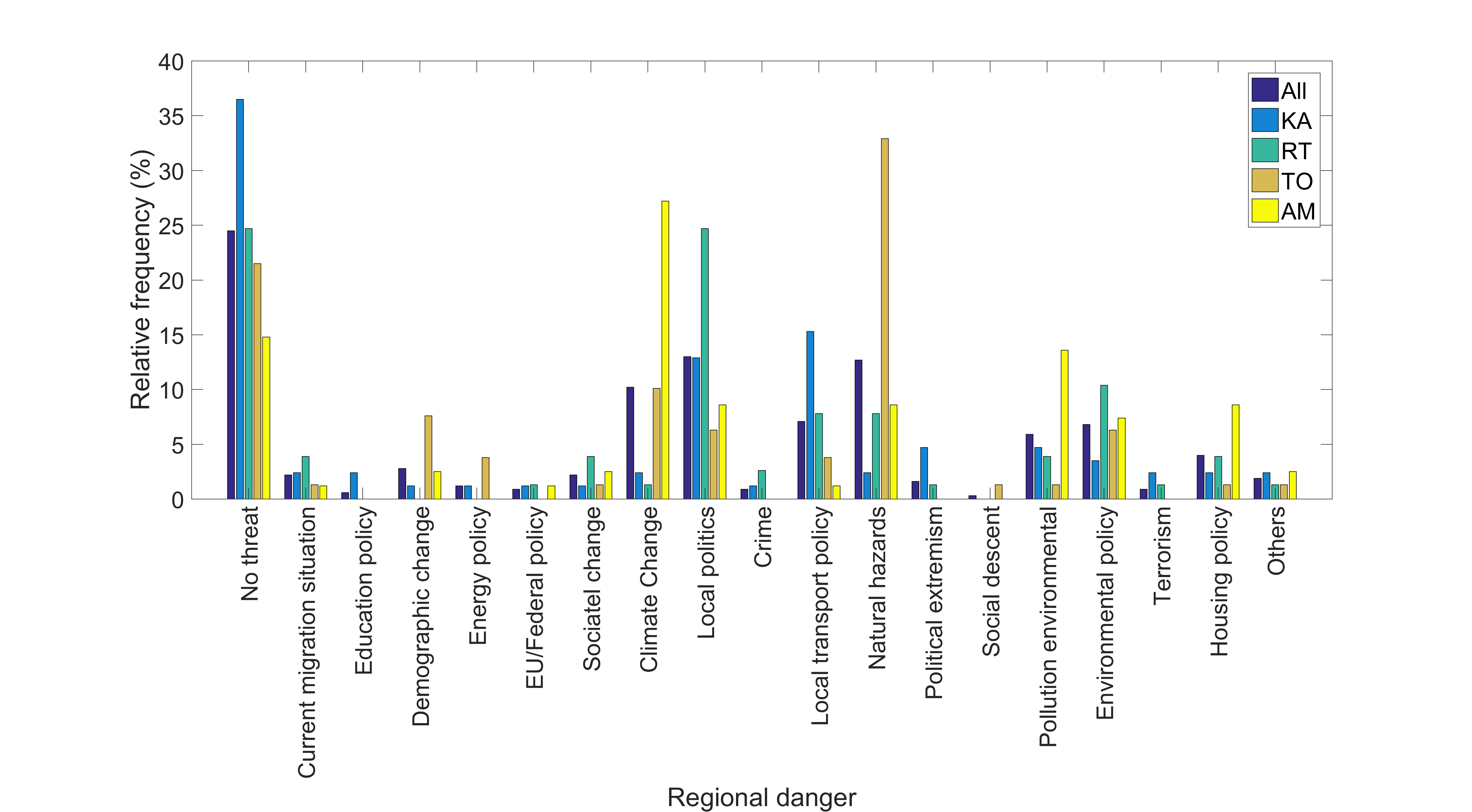 Fig.: First results of the street arch survey on the open question "What in your opinion is the greatest danger for your region? (KA=Karslruhe, RT=Reutlingen, TO=Tönnig, AM=Amrum and ALL=Medium from all four regions).