Aircraft and lidar measurements during the CROSSINN campaign: complex cross-valley flow structure as never seen before

While the exchange of mass, momentum and energy over horizontally homogeneous, flat terrain is mostly driven by vertical turbulent mixing, thermally and dynamically driven mesoscale flows substantially contribute to the earth-atmosphere exchange in the atmospheric boundary layer over mountainous terrain (MoBL). The interaction of these processes acting on multiple scales leads to a large spatial variability and a complex structure in the MoBL, whose observational detection requires comprehensive instrumentation and sophisticated measurement strategy. 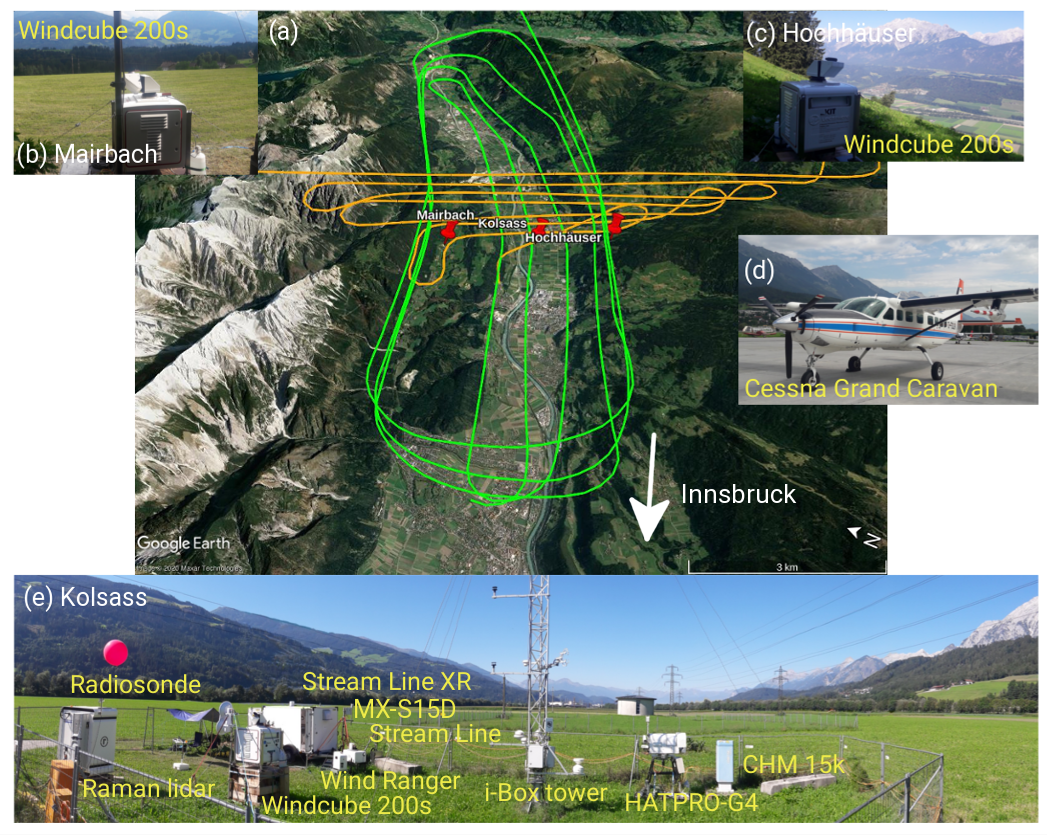 Fig.1: (a) Investigation area in the Inn Valley (map data: Google Earth, 2020 Maxar Technologies) with the cross- and along-valley flight legs of the DLR Cessna Grand Caravan 208b (d) indicated in orange and green, respectively. Photographs of CROSSINN instrumentation at the three ground-based sites at (b) Mairbach, (c) Hochhäuser and (e) Kolsass.

We designed a field campaign with the aim of sampling the three-dimensional flow structure and its impact on the MoBL in a major Alpine valley. The field portion of the campaign took place between 1 August and 13 October 2019 in the Inn Valley, Austria. Taking advantage of an existing network of surface flux towers and remote sensing instrumentation, we added a set of ground-based remote sensing instruments, consisting of six Doppler lidars, a ceilometer, a Raman lidar and a microwave radiometer, and performed radio soundings and aircraft measurements for upper-air information (Fig. 1). The objective of the CROSSINN (Cross-valley flow in the Inn Valley investigated by dual-Doppler lidar measurements) experiment is to determine the mean and turbulent characteristics of the flow in the MoBL under different synoptic conditions and to provide an intensive data set for the future validation of mesoscale and large-eddy simulations. A particular challenge is sampling the two-dimensional kinematic flow in a vertical plane across the whole valley using coplanar synchronised Doppler lidar scans.

One example of such a cross-valley circulation cell influencing the MoBL in a valley, is illustrated in Fig. 2.  From this perspective looking downvalley (towards east), the circulation manifests as a counter-clockwise vortical motion, with a broad updraught region above the southern valley sidewall, and a broad downdraught region above the northern valley sidewall (Fig. 2a). At this time, the dominant flow direction, so-called upvalley flow, was oriented out of the figure, nearly perpendicular to the plane shown in the figure. The coincident in-situ aircraft measurements conducted during this time period (Fig. 2b), show the circulation as well, in agreement with the wind field obtained from coplanar synchronised Doppler lidar scans (Fig. 2a).  The estimation of the momentum budget terms indicates that the circulation arises from an imbalance of forces in the cross-valley momentum budget, owing to a slight curvature of the valley at the investigation area. There is evidence that an imbalance along the vertical, between the centrifugal acceleration pointing south and a lateral pressure gradient force pointing north, drives such a phenomenon. A similar phenomenon is commonly observed in curved subaerial canyons (e.g. rivers) and curved submarine canyons at the bottom of the sea. Such persistent regions of updraughts and downdraughts, lasting for several hours, significantly alter both the horizontal and vertical turbulent exchange within the MoBL. 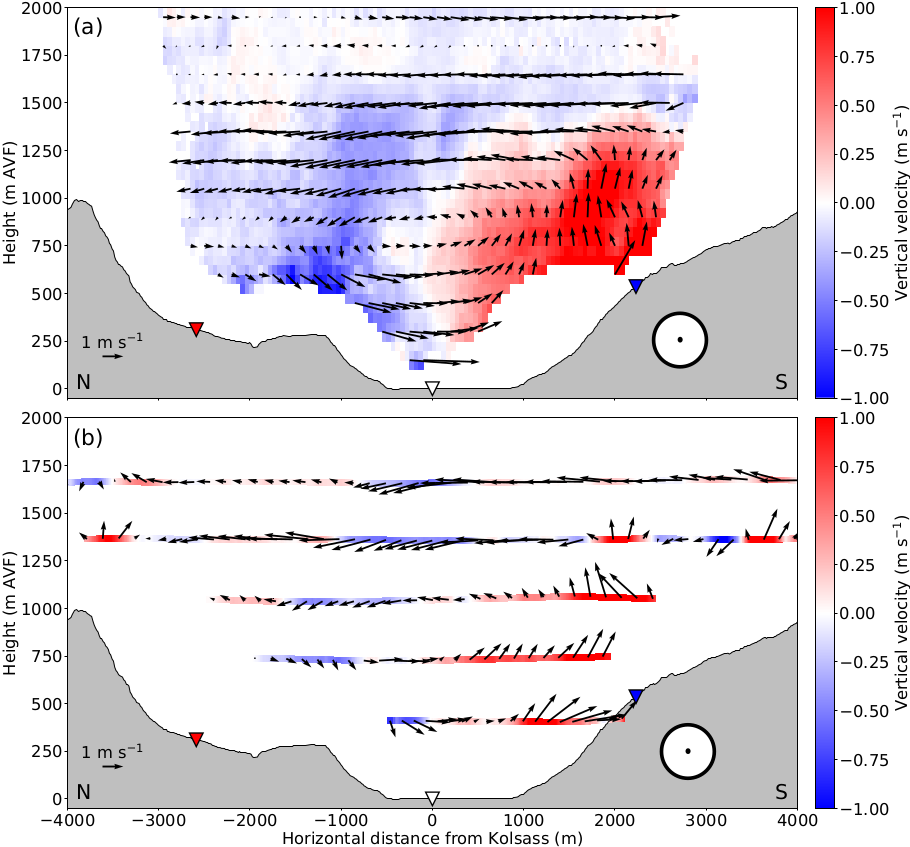 Fig. 2: (a) Cross-valley circulation during 14 August 2019: (a) two-dimensional wind field (arrows) and vertical velocity (color-coded) retrieved from the coplanar Doppler lidar scans
and averaged for the time period 18:00 to 18:45 LT (local time) and (b) vertical velocity (color-coded) and two-dimensional wind vector projected on the vertical plane (arrows) as measured during the cross-valley aircraft flight between 17:59 and 18:17 LT. From left to right, the markers indicate the locations of Mairbach, Kolsass and Hochhäuser, respectively.