Strong increase of heat stress in Germany in the near future

The last decades have shown that heat stress is playing an increasingly important role for human health and well-being. The increase of extreme temperatures is very often accompanied by increased humidity. Combined, this leads to a reduced ability of the human body to release heat. Even mid-latitudes are now affected by heat waves with sometimes lethal consequences. To quantify heat stress, one- or two-parameter indices, i.e. either temperature or a combination of temperature and humidity were used in the past. However, human thermal comfort depends on more meteorological factors than these two, and on physiological ones as well. Important thermal environmental parameters are air temperature, radiation temperature, humidity and wind, physiological ones are metabolic rate and clothing.

In a recent Ph.D. thesis (Brecht 2019), the impact of climate change on heat stress is analysed using a well-accepted, state-of-the-art metric accounting for the factors mentioned above: the UTCI (Universal Thermal Climate Index); the UTCI is expressed as an equivalent temperature as shown in Fig. 1.
Based on an ensemble of regional climate simulations created with the regional climate model COSMO-CLM, the effects of climate change on the UTCI with a focus on heat stress events are analysed for Germany, as well as the effects of climate change on the distribution and intensity on weather types and their connections with heat stress events. In order to calculate UTCI thresholds, a multivariate bias correction preserving the relationships between the individual parameters was performed on hourly data for the first time.

The projected climate changes between 1981–2000 and 2031–2050 entail significant increases of both the mean UTCI and the number, duration and intensity of heat stress events (see Fig. 2). In some regions of Germany, especially in the South and the East and including large metropolitan areas, about 50% more days with strong heat stress (UTCI ≥ 32 °C) and more than 100% more days with very strong heat stress (UTCI ≥ 38 °C) are projected. The projected future frequency distribution of the hourly UTCI can be described by a shift to higher values with an almost unchanged form of distribution.

The analysis of the projected changes of weather patterns show, up to a few exceptions, no significant changes of the weather pattern distribution, but the characteristics of the air masses associated with the weather types change towards warmer and more humid conditions. It was also found that significantly more heat stress events occur in cities than in the surrounding areas, mainly due to the reduced nightly cooling in the cities.
The results suggest that sustainable protection against increased, longer and stronger heat stress can only be achieved by limiting global warming combined with adaptation measures especially in urban areas (improved building technology indoors and outdoors as well as careful spatial planning) in order to maintain public health. 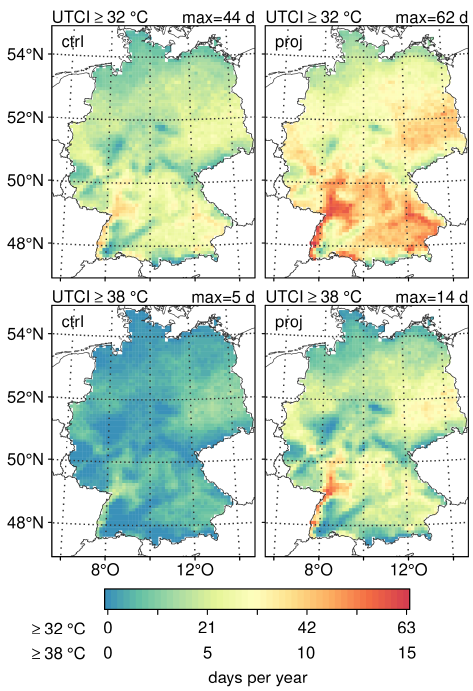