This text is adapted from an official KIT expert’s statement published on 26.6.2019. The original text (in german) written by Timo Schreck is available at http://www.sek.kit.edu/kit_express.php.

Central Europe suffers from the current heat wave. The danger of forest fires and health impacts accompanies such extreme weather. Today, we expect the hottest day of the week with maximum temperatures of up to 40 degree Celsius. Often air masses from the Sahara are said to cause these hot temperatures. Researchers at IMK-TRO now show that this is only half of the story – the near-surface air causing the blazing heat in Central Europe is also produced locally.

„Heat waves are periods of at least three consecutive days with maximum temperature in excess of the top 10% of the hottest days in a season”, explains Andreas Fink from IMK-TRO at KIT. To define these hottest days, mostly a reference period of the last 30 years is considered. However, the current hot near-surface air does not originate from the Sahara but is produced locally, as recent research by Philipp Zschenderlein’s project “Predictability of heat waves in Europe” within the DFG-funded collaborative research center “Waves to Weather” (https://www.wavestoweather.de/) shows: „On the way to southern Germany, the air mass in the lower-levels (up to 2km) descend and warm by so-called adiabatic compression. This process can be imagined like the warming in a bicycle tyre inflator. This time the warming due to descent is unusually high compared to other heat waves.“

Julian Quinting and Christian Grams of the Young Investigator Group “Large-scale Dynamics and Predictiability” at IMK-TRO computed the origin of the current near-surface air mass which reveals that it originates from the Baltic Sea region (Fig. 1). On Saturday, its air temperature was only about 10 degree Celsius, but at a higher altitude. Air from the Sahara still plays a role as the two researchers add: „It conditions the large-scale environment to allow local warming over Europe. In mid-levels of 3-5 kilometres air from North Africa are advected towards Europe and enhance the high pressure system called ‘Ulla’. Numerical weather forecasts indicated the start of this large-scale weather regime characterised by high pressure over Europe and low pressure over the East Atlantic already 10 days ahead of the peak of the heat wave which allowed a very reliable forecast.“ 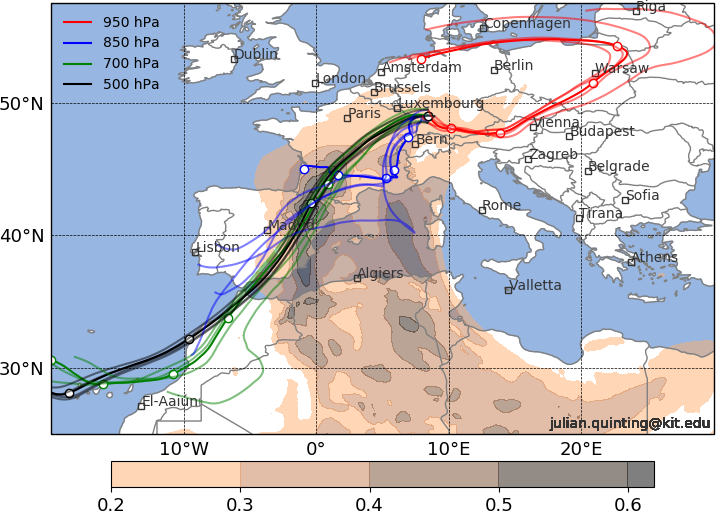 The mid-level air from the Sahara transports unusually high amount of dust, as revealed by novel dust forecasts with the numerical modelling system ICON-ART, run by Heike Vogel in collaboration with the Deutscher Wetterdienst (DWD) (Fig. 1). This also affects the forecast of maximum temperatures, as her colleague and leader of the working group “Aerosols, Trace Gases and Climate Processes”, Bernhard Vogel, adds: „The high amount of dust cause uncertainty in the forecast of maximum temperature. The dust reduces the direct insolation but could also influence the formation of mid- and high-level clouds and thus reduces insolation significantly.” This is an important topic of current research activities at IMK-TRO.

Research on heat waves at KIT is one of the key competences of IMK-TRO. Next to a Young Investigator Group, KIT is also involved in several research projects: The DFG-funded transregional collaborative research centre „Waves to Weather“ (W2W) aims – amongst others – to advance predictability of heat waves. Within the sub-project „The role of multi-scale Dynamical Processes in shaping recent and future extreme Heat waves over Germany (DynProHeat)“ of the BMBF initiative „Climate Change and Extremes“ (ClimXtreme) Andreas Fink and Joaquim Pinto will investigate how climate change will affect heat waves. The project „Solar power reduction due to Saharan dust“ (PerduS) in collaboration with the Deutscher Wetterdienst (DWD) aims to improve forecasts of solar power output during Saharan dust events.

last change: 2019-07-18 KIT – The Research University in the Helmholtz Association